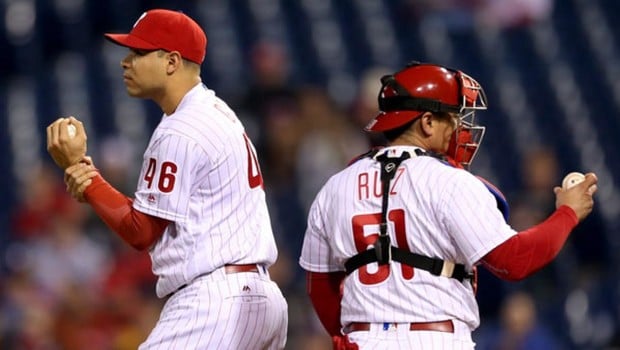 WHIFF CITY! VINNY AND THE PEN STRIKE OUT 17 IN PHILLIES’ 3-1 WIN

Miami loaded the bases in the ninth against Jeanmar Gomez (above left), who allowed a Derek Dietrch sacrifice fly, but got Martin Prado to ground out to seal the win and earn his 15th save.

Phillies right-hander Vince Velasquez worked out of a first-inning jam and struck out 10 in five shutout innings.

The bullpen kept the K’s coming, Phillies pitchers racking up 17 in a 3-1 win over the Marlins last night at Citizens Bank Park.

Tommy Joseph, who picked up his first big league hit on Monday, homered for the first time in his career in a 3-for-4 night. The drive off the foul pole in left in the second inning was the first of three runs (two earned) allowed by Miami lefty Wei-Yin Chen in six innings. The Marlins had their three-game win streak snapped.

“Tonight was all about Tommy Joseph and the bullpen,” Phillies manager Pete Mackanin said. “It was nice to see Tommy get his first home run. He made that great play to end the game. Not much more you can ask for from him.”

The 17 strikeouts by the Phillies is the most since the club fanned 18 on May 6, 2011, against the Braves, which also is a franchise mark for a nine-inning game. For Miami, the 17 times striking out matches a team high for nine innings, with the last coming on April 10, 2014, at Washington.

Miami had runners on second and third with no outs in the first against Velasquez. But the right-hander worked out of it, and he also stranded runners at the corners in the third. Miami did manage to raise his pitch count, and after 103 pitches and five innings, the Phillies were into their bullpen.

“To win a game when your starter throws over 100 pitches in five innings is really a bonus,” Mackanin said.

With the win, the Phils moved a half-game behind the Nationals for first place in the National League East. Miami’s Marcell Ozuna had his 16-game hit streak snapped.

“[Velasquez] gets off the hook in the first there, we get him in trouble,” Marlins manager Don Mattingly said. “He’s got 75 through three innings. We did a nice job of battling him. He’s got good stuff. It seems like from there, we didn’t really put anything together until there at the end.”