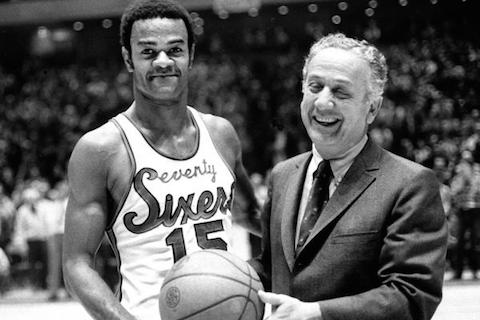 Okay, Sixers fans. Put your cynicism aside for a moment.

Even that Gray Lady of journalism, the New York Times has taken notice:

It is already January, and three teams — the Sixers, Minnesota Timberwolves and the New York Knicks, have managed only five wins each. These teams are so woeful that there has been talk that one (or more) might break the league’s futility mark, the legendary 9-73 record of the 1972-73 Sixers.

That abysmal team actually included a Hall of Famer, Hal Greer, though he was 36 and a bench player. Its top scorer was guard Fred Carter, who eventually coached the team for a season and a half in the 1990s, going 32-76. His backcourt mate was a rookie, Freddie Boyd, who was thrown into the starting lineup and shot under .400. He never played as many minutes again and was out of the league at 27.

Early in the season, with the team 0-10, the Sixers tried to turn things around by acquiring a big man from the Lakers, 32-year-old LeRoy Ellis, who may not have been delighted to leave a team that would win 60 games and make the N.B.A. finals. It did not help, and the team went on to be 0-15 and later 3-38. A bizarre run of five wins in seven games in February put it at 9-60, but 13 straight losses to end the season established the famous mark.

Though the 2011-12 Charlotte Bobcats had an even lower winning percentage (.106 compared with .110), it came in a strike-shortened season; no team has ever matched the Sixers’ miserable record over the full 82 games. (The Bobcats played 66 and won only seven.)

At first glance, this season’s five-game winners may seem to be strong candidates to match or break the ’72-73 Sixers’ mark of futility. This season’s Sixers have dropped or traded their most productive players, and are playing youngsters and journeymen while promoting the team with a campaign called Together We Build. Plenty of commentators see it simply as tanking, to try to land a better draft pick.

Last season’s rookie of the year, Michael Carter-Williams, is shooting 38 percent. A bright spot off the bench, Alexey Shved, who had some good, subtle advanced statistics, was promptly traded for Ronny Turiaf, a second-round pick and the rights to a Ukrainian playing in Spain.

So why have none of these putrescent teams knocked the Sixers off their perch? And why have so many played well, or at least better, very late in the season?

Regression to the mean — exemplified in this case by the tendency of all teams, good and bad, to move closer to average — is one factor. Another is that teams that are nearing such an ignominious record often become highly motivated to avoid breaking it.

Expect to see that 9-73 record in the books for years to come.