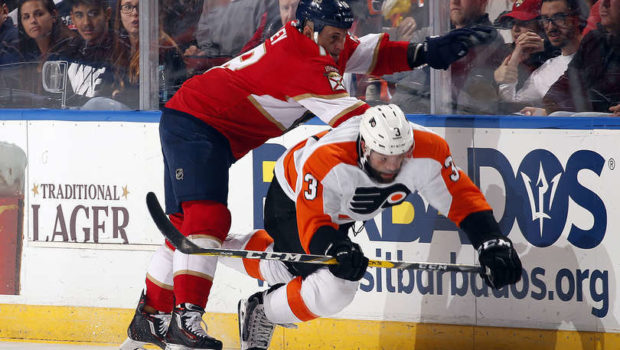 The Flyers blew a chance to advance in their seemingly hopeless chase for a playoff spot last night in Florida.

They now have 38 points, six behind the Isles for the East’s second wild card.

Brian Elliott made 24 saves for the Flyers:

“I think our urgency was a little off coming into this one,” Elliott said. “They came at us hard and we really didn’t match it, until the last 10 minutes of the game, and that can’t happen.”

Reimer, who was coming off a 1-0 victory against Ottawa on Saturday night, faced an aggressive Flyers comeback in the latter part of the game after the Panthers carried a 3-0 lead into the third.

“They’ve got a lot of offensive talent. As a goalie you want to make some saves, but they’re bound to score on some chances,” Reimer said. “You just keep chugging away and make sure you have that high compete level and things will end the right way.”

Scott Laughton wristed a back pass past Reimer with 7:32 remaining. Couturier added his 17th goal with 2:02 left, but Florida held on.

“We really didn’t start playing until about halfway through this game,” Flyers coach Dave Hakstol said. “We needed to match the intensity level that the game was at and try to find a way to help us get back into it.”

Michael Raffl, who picked up an assist on Flyers’ first goal, said things need to change heading into the new year after Philly lost its third straight game.

“We didn’t win enough battles. There’s lots of excuses out there if you look for them,” Raffl said. “At the end of the day we weren’t good enough tonight.”