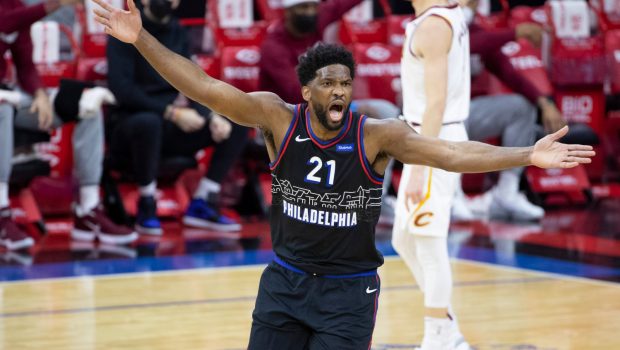 The Sixers Tobias Harris didn’t make the All-Star team, and his absence last night against the Cavs underscored his importance.

Collin Sexton scored 28 points, Garland had 25 and the feisty Cavaliers beat the East-leading Sixers 112-109 in overtime.

Harris missed the game because of a knee contusion.

Joel Embiid had 42 points and 13 rebounds for the Sixers and Ben Simmons scored 24.

Sexton hit a 3 late in regulation that put the Cavs ahead 92-90, but Embiid answered with a tying dunk. The score went back-and-forth all quarter and the Cavs had a chance to win late. Sexton missed a long 3 coming out of a timeout and Matisse Thybulle grabbed the defensive rebound. Embiid missed a step-back 15-footer with one second left and the game went into OT tied 92-all.

Embiid’s ability to draw fouls — he’s been accused of flopping — at an elite level continued against the Cavs. Embiid let out an “ahhh!” as he tangled with JaVale McGee and went to the line. McGee was whistled for three fouls in 1 minute that led to four made free throws by Embiid, and Jarrett Allen also had three fouls by halftime. Embiid was 11 of 12 from the line in the half; the Cavs just 10 of 13.

Sixers coach Doc Rivers yelled, “Wake up! Let’s go!” with the Sixers down 39-30. The Sixers needed time to snap out of their slumber.

”We were running our offense like it was a walkthrough,” Rivers said.

Embiid and Simmons carried the Sixers in the first half and combined to score 33 of their 47 points. The other three starters scored just seven points and the Cavs led 56-47 at the break.

The Cavaliers ran and ran after Sixers’ misses and scored 17 fast-break points in the half.

The Sixers shook off a 13-point hole and got rolling in the third, in large part because Embiid and Simmons had help from the bench. Mike Scott hit a 3 that pulled them within one. Shake Milton hit the floater that tied it at 65.

The Cavs pushed the pace and shut down every Sixer outside of Embiid and Simmons to get a win they hope will prove better days are ahead.

“Are we there yet? No, we’re not finished,” Bickerstaff said. “But we’ve got to continue to answer the bell when tested.”