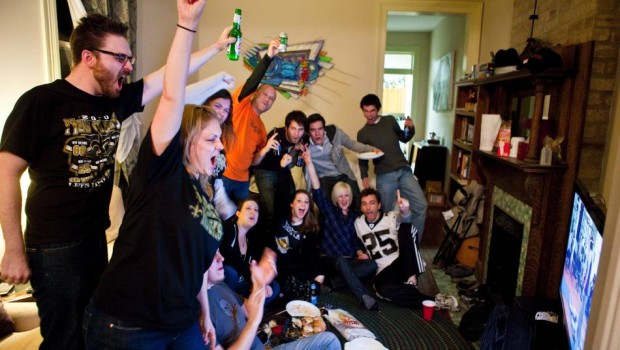 WHERE TO SIT IS THE BIGGEST DECISION AT A SUPER BOWL PARTY!

One of the key decisions you will make today is where to sit at your Super Bowl party.

The seating situation is important at any party, especially when the whole party revolves around watching TV. If you don’t put some thought into how people will watch the game and making sure you have enough seating options, you very well may have some unhappy party-goers on your hands.

A solid rule of thumb: The best seats around the TV go to the people who are really into watching. If there are any legit Broncos or Panthers fans at your party, they get first dibs on these prime seats. After them, those who are just big football fans and want to check out the game get priority. That doesn’t mean you should be a jerk and demand people who aren’t watching the game enough move. Instead, there are some subtle ways you can direct traffic at your party.

If you can put two TVs in separate rooms, do so. Naturally, diehard football fans will gravitate toward one room while those who are more interested in socializing go to the other. You can signify which is which by leaving the volume on in one room and playing music in the other. That way you won’t have any disputes if there are some people who want to hear the commentary instead of music. (With Jim Nantz and Phil Simms manning the broadcast, though, maybe just play music in both rooms.)

If you can’t put TVs in two rooms, make sure there’s plenty of space between the food and the TV-watching area. People will congregate around the food wherever you put it.

There will always be a few people who don’t care about football. They’re just there because Super Bowl parties are what social humans do on Super Bowl Sunday. And that’s perfectly fine. The main thing to remember is to make sure everyone, sports fan or not, is having fun. The game and commercials will take care of most of that, so just make your Buff chick dip and enjoy the party!