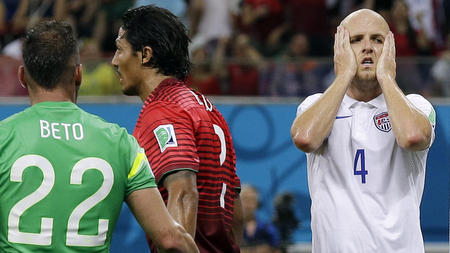 WHEN WILL MICHAEL BRADLEY SHOW UP FOR THE UNITED STATES?

Two months ago, Michael Bradley played the best 45 minutes by anyone in an American uniform in ages in a friendly against Mexico, scoring, setting up and dominating. Mexico Coach Miguel Herrera went even further.

“Bradley,” Mexico coach Miguel Herrara said afterward, “looked as if he was the best player in the world.”

Two games into this World Cup, that Bradley has yet to show up.

The Bradley who once made the U.S. team go is now one who holds it back. In its opening win against Ghana, he gave up possession of the ball much too easily and completed barely half his passes in the attacking third of the field — mistakes that were glossed over when the U.S. rallied for a 2-1 win.

It wasn’t as easy to forgive Bradley’s mistakes in Sunday’s 2-2 tie with Portugal.

The first came in the 55th minute when a back pass from Fabian Johnson found Bradley standing six yards from a net without Portugal’s goalkeeper, who was pulled out of position. All Bradley had to do was tap the ball in, but instead he knocked it right at the knee of Portuguese defender Ricardo Costa.

Then in the waning moments of stoppage time, when all the U.S. had to do was get the ball to a corner and run out the clock, Bradley’s first touch on a header from Geoff Cameron was too strong, and with a shove Portugal’s Eder took the ball away at midfield, starting the quick counterattack that led to the game-tying goal.

If Bradley had made either play correctly the U.S. is already through to the knockout round. But he didn’t and now the U.S. needs a win or tie against Germany on Thursday to assure itself of advancing.

Like it or not — and judging from the comments on social media, many fans don’t — the 26-year-old Bradley is the heart and soul of the U.S. team. He is the emotional leader, the one the other players depend on. No one works harder or cares more than the son of the coach, Bob Bradley, who led the U.S. to the knockout stage four years ago in South Africa.

But he wasn’t the only one responsible for Sunday’s game ending in a tie. Despite U.S. Coach Juergen Klinsmann’s exhortations for his players to retreat into their defensive positions, on the final play there were five Americans on the Portuguese side and another at midfield, not exactly the best formation for protecting a lead. And Cameron, a defender whose poor clearance led directly to the first goal, was also beaten cleanly on Portugal’s second one when Cristiano Ronaldo’s long cross found Varela in front of the goal for the game-tying header.

“When you see goals, it’s always a sequence of mistakes that happen and that’s unfortunate. But that’s why goals happen,” Klinsmann said. “In that moment, I think Michael Bradley got caught in the middle of three or four guys and lost the ball unfortunately. Then the counter break comes and . . . we were not able to get to that cross, which was a beautiful cross and so they finished it off.”

If anything Bradley played better — much better — against Portugal then he did against Ghana. He distributed the ball better, was sharper with his passing and was involved in the play that led to Clint Dempsey’s goal in the 81st minute that gave the U.S. the lead.

“There is so much that goes through him and he has a lot on his shoulders, but I know that he wouldn’t have it any other way.”

Which brings us back to the Mexico game. After that dominant first half, Herrera directed his defense to smother Bradley, denying him both the ball and space, and Mexico rallied from a two-goal deficit to earn a draw. Despite occasional flashes of brilliance, Bradley hasn’t played a half like that since.

Was Herrera’s formula for controlling Bradley something other U.S. opponents have copied? Is Bradley simply in a slump? Whichever it is, Bradley and Klinsmann have 90 minutes Thursday to figure it out or risk elimination.

“Michael is undoubtedly one of our key players,” Klinsmann said. “He’s covering up for other players all over the place. His vision and his passing [are] just outstanding.

“Here and there it’s not going to be a perfect game all the time. I’m not expecting perfect games from anybody. I’m absolutely sure that Michael will grow big time into this tournament. There’s no better stage to do it than in the next game against Germany. Every game you play now is getting bigger so that’s when you want to see those things coming through.”