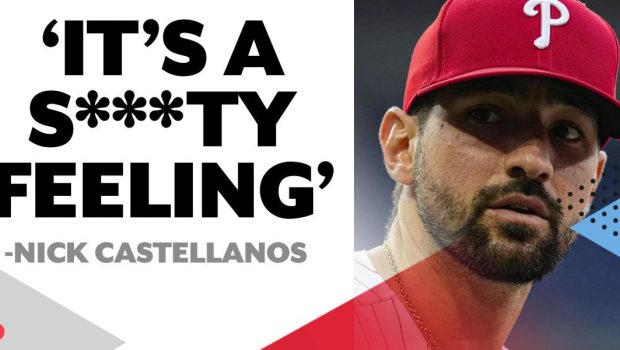 WHEN WILL NICK DELIVER FOR HIS BIG BUCKS? ‘ONLY MATTER OF TIME’!

The Phils signed Castellanos to a five-year, $100 million contract in mid-March.

One glaring exception to the theory that the Phillies have finally righted their ship even though the winning streak ended is Nick Castellanos, who went 0-for-3 yesterday with three strikeouts.

“I haven’t been comfortable all year,” Castellanos said.

“But it’s only a matter of time, I’ll tell you that. It’s kind of one of those things that sometimes you just go through phases that you don’t really have a good feeling at the plate. At least for me. Just one at-bat. Honestly sometimes all it takes is just one swing and then it just clicks and starts rolling.

“That’s just a reminder, don’t take the game so serious,” Castellanos said. “Baseball can be a funny game sometimes. Sometimes it can [really] suck, you know? That’s the honest truth of it.”