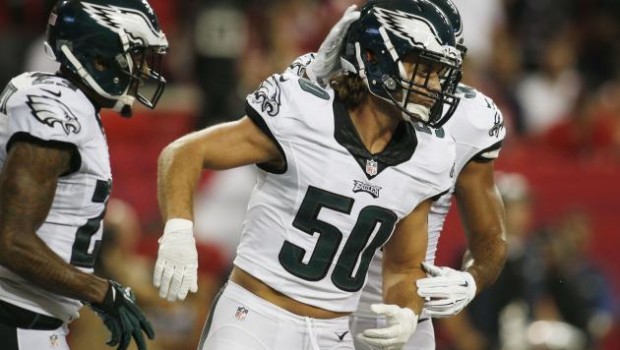 WHEN KIKO RETURNS, WHERE DOES HE FIT IN EAGLES LB SCHEME?

Kiko Alonso suffered an ACL strain way back in Week 2, the same surgically repaired ACL that caused him to miss all of 2014. While the goal is to play again this season, he hasn’t been sighted in an Eagles uniform since, and the defense has moved on just fine without him.

In fact, Alonso’ absence paved the way for the emergence of Jordan Hicks. The third-round draft pick out of Texas wasn’t expected to be a factor for the Eagles this season. Instead, the rookie is tied for the clubhouse lead with 43 tackles to go along with a sack, a forced fumble, an interception, two pass breakups and three fumble recoveries.

Hicks has earned his place in the Eagles’ interior linebacker rotation. Mychal Kendricks has as well, and the pricey four-year contract extension he signed in August demands significant playing time. DeMeco Ryans is the leader of the Birds’ defense and signed through 2016.