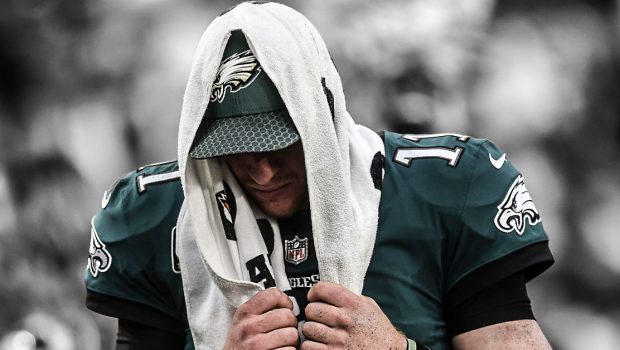 WHEN ARE EAGLES GOING TO COME CLEAN ON CARSON WENTZ’S BACK?

Eagles quarterback Carson Wentz injured his back and missed the last three games of last season plus the playoffs.

And, at the time, the Eagles kept us in suspense about whether or not he was going to come back and play.

Wentz said last month that his back is “still getting there” in response to questions about whether he was back to full health and head coach Doug Pederson offered another update on his condition yesterday.

Pederson said at a press conference that Wentz has been on the field during workouts in the current phase of the offseason program, but said he would not get “too specific” about the quarterback’s workload at this point.

Pederson was willing to say that he was encouraged by how the quarterback is coming along. He would not say whether or not Wentz will be ready for full participation once organized team activities get underway on May 21. The 10 OTAs and June’s mandatory minicamp represent the final stage of work before the Eagles take a break ahead of training camp.

Back-to-back season-ending injuries for Wentz hasn’t dampened the team’s enthusiasm for signing him to a long-term deal, but there’s still plenty of interest inside and outside the organization in seeing how he’ll fare in his return from this issue.