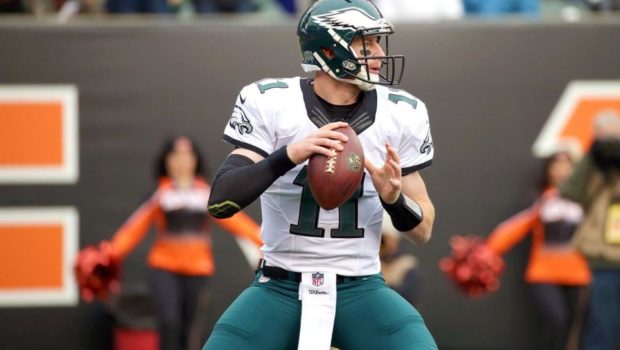 WHEELS COMING OFF: EAGLES GET ‘F’ FOR EFFORT AGAINST BENGALS!

As the Eagles’ 2016 season continues to disintegrate before our eyes, head coach Doug Pederson had to defend his team once again in the wake of yet another pedestrian effort, as they absorbed a 32-14 defeat at Paul Brown Stadium Sunday to the Cincinnati Bengals.

Pederson was asked point blank if he still believed he was getting 100% play out of his troops, and he finally had to admit “not everybody.” — the first time the coach had to acknowledge what all could see, even going back to the Packers game the week before.

Bengals QB Andy Dalton was having a real tough year before the Eagles showed up, and he got well real quick, carving up the Birds’ secondary throwing for 332 yards, with 2 TD strikes.

To be fair, the Eagles were without Ryan Mathews, and Jordan Matthews, two integral pieces of the Birds offense, but still Pederson allowed QB Carson Wentz (above) to take a beating throwing the ball a ridiculous 60 times for 308 yards, one TD and three interceptions!

Pederson had somehow let it slip out answering a question that the Eagles were in a “rebuilding” mode, not realizing, or worse not knowing that that word was going to give some of his players a reason not to bust their butts to win the remaining Sunday’s, and that’s what he got, about 75% effort, not nearly enough to win an NFL game.

Not giving 100% effort in the city of Philadelphia is unacceptable and won’t be tolerated.

It’s now Pederson’s job to get that point stressed to his football club before taking the field again.

The Eagles will host the Washington Redskins next Sunday, December 11, 1pm/Fox