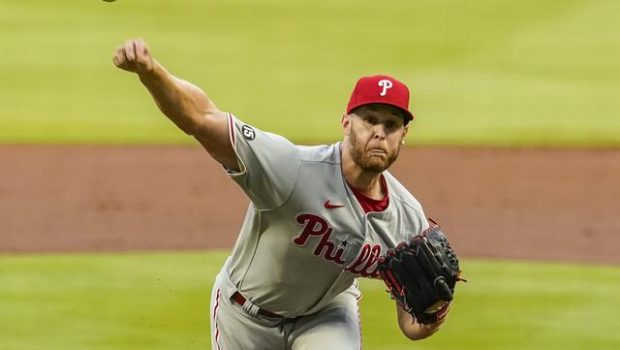 WHEELS COME OFF AND PHILS CRASH AND BURN!

With any luck, last night’s crash-and-burn game was a one-off for the Phillies.

Ronald Acuña Jr. had four hits and made a leaping catch to support Charlie Morton’s six strong innings, leading the Braves to an 8-1 win.

Andrew McCutchen’s run-scoring single in the third gave the Phils a 1-0 lead.

Acuña’s fifth-inning blast off Wheeler (1-1) traveled an estimated 456 feet, landing deep in the center-field seats behind the Braves bullpen for a 2-1 lead.

“That was probably one of the harder ones I’ve hit,” Acuña said through a translator.

Acuña also had two doubles and showed his speed by beating out an infield single in the eighth.

“That just shows the complete player that he is,” Braves manager Brian Snitker said.

Morton (1-1) permitted one run and four hits. The veteran right-hander struck out seven and walked one.

“That was the best my curveball has felt and I felt really good throwing it,” Morton said.

Pinch hitter Ehire Adrianza connected for a three-run homer and Freddie Freeman added a two-run shot as Atlanta’s hitters shook off a slow start to the season. The Braves were held to a combined three runs while being swept in a three-game series at Philadelphia last week to open the season.

Leading 3-1, Morton escaped the sixth inning with runners on first and third when Acuña made a leaping catch of Alec Bohm’s drive at the warning track in right field.

Morton, 37, won his first home start with Atlanta since his 2008 rookie season. He returned to Atlanta as a free agent following 12 seasons with Pittsburgh, Houston and Tampa Bay.

Adrianza was reinstated from the restricted list before the game. His homer off Brandon Kintzler in the sixth drove in Austin Riley and Cristian Pache, who reached on errors by Bohm at third base. Freeman’s homer off David Hale in the eighth pushed the lead to 8-1.

The Braves won their home opener before a crowd of 14,302 as fans returned after being kept away during the pandemic in 2020. The Braves are allowing about one-third of the seats at Truist Park to be used in their first homestand. They plan to expand that to 50% in their next homestand.