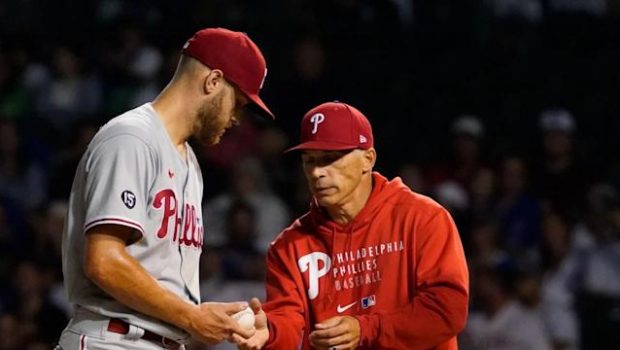 This is what happens when Phils ace Zack Wheeler has an off-night.

Their pennant chase goes slightly off the rails.

And if you mix in a popgun offense, you get a terrible result.

And the Phillies awakened this morning tied for the lead in NL East with the Braves.

Joey Votto hit a three-run homer and Tyler Mahle tossed seven shutout innings to lead the Cincinnati Reds to a 6-1 win over the Phils.

Nick Castellanos added a solo homer and Eugenio Suarez hit a two-run shot for the Reds (63-54), who trail Milwaukee by 7 1/2 games in the NL Central, even though they have a better record than the Phillies. The Phillies (60-56) started the night in first place in the NL East.

Mahle (10-3) allowed three hits and walked none in his second straight win. Michael Lorenzen worked the eighth and Heath Hembree gave up a run in the ninth.

“The pressure’s not on me. I just have to go out and execute pitches and let them make plays,” Mahle said.

Mahle said he wanted to win Friday on his dad’s birthday.

“I’ve seen him get better from Day One in the league,” Votto said. “Now he’s realizing that potential and that work is paying off. We need as much help as possible and Tyler’s been excellent all year.”

With the Phillies chasing their first postseason appearance since 2011, Wheeler (10-7) stumbled on a steamy night. The ace right-hander threw a two-hit shutout in his last start against New York.

Tyler Naquin led off the fourth with a single and Wheeler plunked Castellanos. Votto’s second-half revival continued when his 26th homer of the season landed in the bullpen for a 3-0 lead. Votto moved into second in the NL in home runs and became just the third player 37 years old or older to have at least one 22-game span with 15-plus home runs.

’It was probably a mistake by me to double up with a cutter to such a good hitter,” Wheeler said. “That’s probably the worst I’ve thrown the ball in a long time.”

Votto has 1,998 hits and trails only four players on the Reds’ career hits list. He is three homers shy of matching Frank Robinson for second on the team’s career list with 324. Votto’s 2,000th hit will make him only the second player (Billy Williams, Cubs, 1971) to reach that milestone the same season he also recorded his 300th home run and 1,000th RBI.

Castellanos hit his 20th homer of the season in the sixth. Suarez’s 23rd homer of the year was a two-run shot to left in the ninth.

Wheeler struck out six and gave up four hits in six innings.

“Games like this you don’t expect to win with such a wide margin,” Votto said.

The Phillies won eight straight games before they dropped two of three at home against the Dodgers. The Mets entered a half-game back in the NL East but were set Friday night to open a 13-game stretch against San Francisco and Los Angeles. Mets ace Jacob deGrom is out with an elbow injury, and the Atlanta Braves are in contention, making the next two weeks a pivotal stretch for the Phillies in the NL East race.

“We’ve got to get going,” Phillies manager Joe Girardi said. “We’ve got some guys who are just struggling a little bit.”