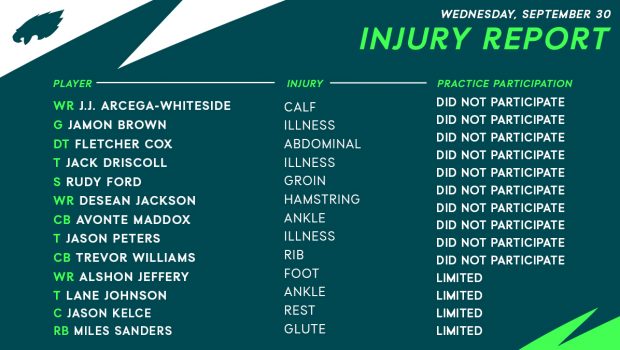 WHAT’S UP WITH ALL THESE EAGLES INJURIES THIS EARLY IN SEASON?

Here’s the Eagles first injury report ahead of Sunday’s showdown in San Francisco and 13 players were listed, including nine who did not participate.

Here’s the list of players who did not participate:

G Jamon Brown (illness): Pederson said yesterday that he wants to get Brown extra reps in practice, but that Nate Herbig and Matt Pryor will remain the starting guards.

DT Fletcher Cox (abdomen): Played like a beast through the injury. Eagles want to make sure he’s available for Sunday.

WR DeSean Jackson (hamstring): Jackson exited Sunday’s game in the second quarter. Pederson said Jackson is day to day. Interesting because with Jalen Reagor injured, Jackson was utilized as a punt returner on Sunday as well.

CB Avonte Maddox (ankle): Pederson said Maddox will “miss some time,” so he’ll be out against the 49ers.

CB Trevor Williams (rib): Williams was thrust into action Sunday after the injuries to Maddox and Darius Slay, who left the game for a brief amount of time. Williams has plenty of NFL experience to provide depth with Maddox sidelined, so this will be something to monitor through the rest of the week.