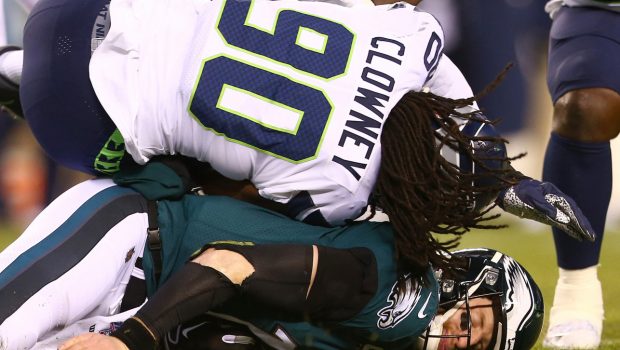 MEMO TO NFL: CLOWNEY’S CHEAP SHOT ON WENTZ MUST BE PUNISHED!

This should be an open and shut case.

The NFL is still reviewing for potential discipline the hit applied by Seahawks defensive end Jadeveon Clowney to Eagles quarterback Carson Wentz last Sunday that cost Wentz all but 9:43 of the game and may have cost the Eagles a chance to win.

Clowney lowered his helmet and initiated contact against an opponent with it.

That was three days ago.

That’s a clear violation of the rule that the NFL passed in 2018, applied aggressively in the 2018 preseason, ignored for the most part in the 2018 regular season and postseason, and dusted off for the 2019 season.

The move should have drawn a flag. Whether it provokes a fine may depend on whether the league is willing to implicitly admit that the flag should have been thrown.

After the game, referee Shawn Smith explained that no penalty was called because Wentz “was a runner, and he did not give himself up.” Smith added that the crew “saw incidental helmet contact, and in our judgment, we didn’t rule that to be a foul.”

It wasn’t incidental. It felt like a reaction to the fact that quarterbacks who run often don’t suffer the same fate as running backs, given that defensive players are now programmed to pull up when the opportunity to blast a quarterback arises. Smart coaches (like Bill Belichick and Pete Carroll, for example) surely are telling their players that when a quarterback runs he’s fair game for a big hit. And some defenders, like Clowney, may be overcompensating for the undercompensation by other defensive players.