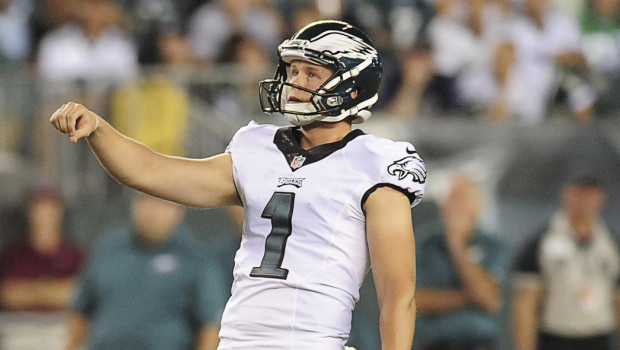 After scoring a third time in the first quarter, they went the safer route and tried for an extra point, but Kip Smith was wide right.

Smith made every kickoff and PAT attempt Saturday night in Green Bay because Cody Parkey was unable to go.

Parkey tweaked his groin in practice this past Tuesday and sat for precautionary reasons.

“It’s not that serious,” Parkey said. “If it was a regular-season game I would have went, but (special teams) Coach (Dave) Fipp told me to just take it easy and freshen up.

“I would describe as not normal, put it that way. Tuesday it felt a little out of norm. Wasn’t anything serious, just taking extra care, being precautionary.”

Parkey went 5 for 7 on field goals in the Birds’ first two preseason games, missing from 34 and 55 yards. He also missed an extra point.

The kicking game was one thing the Eagles did not have to worry about improving this offseason because Parkey was 32 for 36 (89 percent) as a rookie with four makes from 50-plus yards.

Parkey’s preseason has been a bit shaky, but at least he won’t have to deal with weather in the season opener Sept. 14 at the Georgia Dome in Atlanta. Parkey missed just one kick indoors last season.