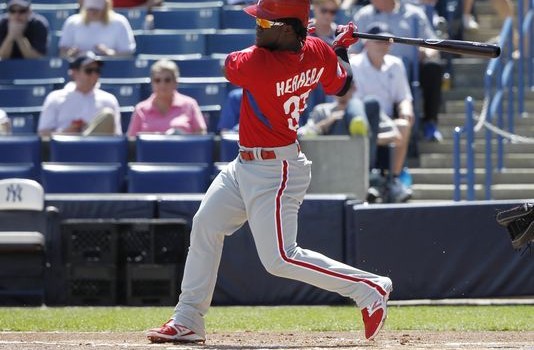 He went 3-for-4 with three stolen bases and two runs scored in a 3-1 victory over the Yankees at George M. Steinbrenner Field.

“A lot stood out,” Phillies manager Ryne Sandberg said. “A spark plug at the top [of the lineup]. Great job with the stolen bases, getting in scoring position, which was big in a 3-1 game. He did a good job of squaring balls up and staying on top of the ball, hard grounders, line drives. Real heads up play with the stolen bases.”

Having Herrera on the 25-man roster the entire season to keep him in the organization beyond this year makes sense, especially if he continues to hit. Herrera batted .321 with 16 doubles, four triples, two home runs, 48 RBIs, 12 stolen bases and a .775 OPS in Double-A Frisco (Texas), where he won the league batting title. His OPS ranked 10th among Texas League hitters with 300 or more plate appearances.

Herrera is expected to play all three outfield positions this spring, but he has played second base and shortstop in the past, so he has versatility defensively.

Sandberg said Herrera was given the green light to steal in certain situations, and he took advantage.