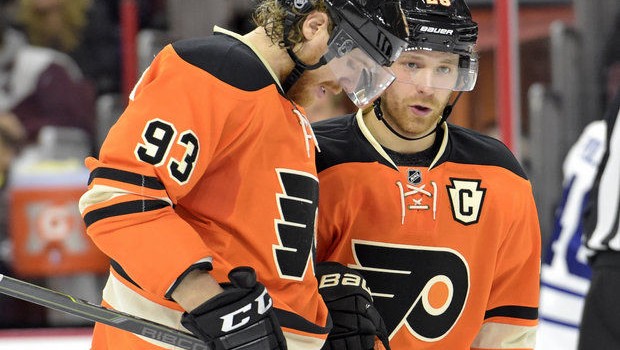 WHAT’S UP WITH GIROUX AND VORACEK, WHO CAN’T SEEM TO SCORE?

The Flyers have two of the NHL’s top offensive machines but they need some tweaking.

Right wing Jakub Voracek is tied for the NHL scoring lead and center Claude Girioux is tied for sixth, but they haven’t clicked together other than on power plays since before late December.

Incredibly, Voracek and Giroux have been on the ice together for one even-strength goal in their last 18 games.

Their only 5-on-5 goal when playing together since Christmas came on Jan. 19 when defenseman Michael Del Zotto scored in the second period of a 7-4 road loss to the New York Islanders.

During these 18 games of struggles together, the Flyers’ top two scorers did better during the infrequent times when they weren’t on the ice at the same time, as Giroux has had two goals and an assist with another right winger, Voracek two helpers playing with a different center.

“They’re not working together right now for me … the line,” Berube said. “Too much getting knocked off the puck too easy. One and down right away. Just not getting through the neutral zone good enough with some speed and getting in the offensive zone. Then when they do, they have to get more involved in the forecheck and get more physical and win more battles. That’s what it boils down to.”

“This time a year it’s tight,” Berube said. “They’re tight-checking (games). (Opponents are) going to be on them. They gotta battle through it.”