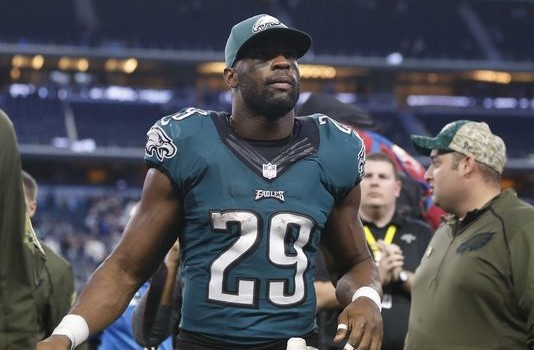 As the dust has settled on the Eagles’ stunning, season-saving 35-28 victory Sunday over the New England Patriots, the question of the day on Tuesday was:

Do the Birds have an official position on underachiveing running back DeMarco Murray?

An interview with offensive coordinator Pat Shurmur elicited not a clue!

“We’re going to come out here and train and get ready to play Buffalo and we’re going to put the guys on the field, based on how they train and how we match up against Buffalo that give us the best chance to win that football game,” Shurmur said. “That’s not coach speak or cliché – that’s just the reality.”

In Sunday’s 35-28 upset victory over the New England Patriots in Foxborough, Mass., Murray played just 14 snaps – 21 fewer than backup Darren Sproles and the same as third-string running back Kenjon Barner – according to Pro Football Focus.

Murray, 27, is in his first season in Philly after signing a five-year, $40 million contract with at least $21 million in guarantees. The reality is that an expensive addition like that is expected to pay off dividends immediately. Ultimately, any failures Murray has in Philadelphia reflect poorly on Kelly, who claimed control of final decisions on player personnel this offseason.

And now that the Eagles (5-7) are suddenly in a three-way tie for first place in the NFC East, the team could be on the verge of a playoff run that seemed unlikely months ago. That means that Murray’s workload will continue to be dissected from all angles. The questions won’t be going away.

Last year, Murray led the NFL in carries (392) and yards (1,845) and tied with Seahawks running back Marshawn Lynch for first in rushing touchdowns (13).

Murray declined to comment Tuesday on the ESPN report that he complained to Lurie about his reduced workload after Sunday night’s victory against the Patriots.

Murray has addressed media on Thursdays all season long, and said after practice that he would answer questions on that day.

Shurmur, however, pointed out that Murray has more snaps this season (418) than backups Ryan Mathews (175), Sproles (306) and Barner (40). And though Murray’s 14 snaps Sunday are a season low, he has led all Eagles running backs in snaps in every other game he has played in this year.

Shurmur said that Murray has not complained to him at all about his reduced workload.

“I think what you have to look at is this: We won a football game the other night against a really fine opponent,” Shurmur said. “And (Murray) contributed in the game. I think that’s the reality of it. There should be some joy in that, for at least a few hours, until we get back to Philly from our flight from Providence. We play all the running backs. We know that. Sometimes guys will play a handful of snaps more than others.”