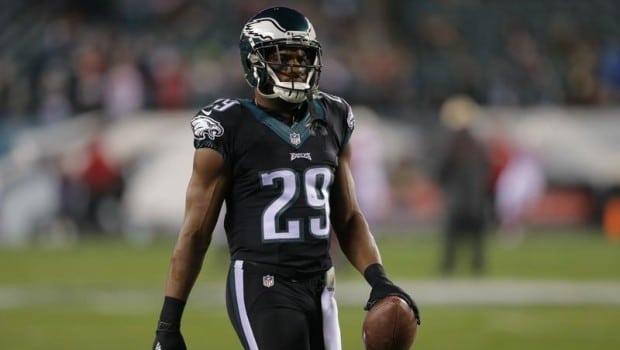 WHAT WILL EAGLES DO WITH BIG-BUCKS BUST RB DEMARCO MURRAY?

Eagles running back DeMarco Murray was a non-factor in last night’s loss to the Cards.

In fact, he was virtually a non-participant.

Speaking after the game, Murray was asked if he wanted to be with the Eagles next season if he was going to have the same limited role.

“Whoever is willing to have me,” Murray said of where he would want to play. “This is where I signed up for, so I’ll be here.”

Murray totaled just three yards on his two carries, and was clearly not a part of the Eagles’ game plan. As running backs Ryan Mathews (11 carries) and Darren Sproles (six carries) got the bulk of the carries, Murray spent the game on the bench, at one point putting on a knit hat instead of his helmet as the offense was on the field.

“Yeah a little bit,” Murray said when asked if was surprised about his role. “You gotta control what you can control and keep grinding and fighting. But it’s out of my control.”

Murray’s new role as a reserve running back started in the team’s win over the New England Patriots two weeks ago. After the Patriots’ game, Murray said he had an idea throughout the week that he wouldn’t be playing very much.

As for the week leading up to the Cardinals game?

He has just 22 combined carries over the past three games, and wasn’t optimistic when asked about the chances of seeing a heavy workload over the next two games.

“We’ll see,” Murray said. “I’m not calling the plays. We are going to keep fighting. We got a chance to make the playoffs. That is all that matters.”

With Murray cemented as one of the highest-paid players on the team, it is fair to wonder if he will be back next season, especially as a role player.

“I’m fine,” Murray said with a smile. “We’re in the hunt. We got two games left, we gotta keep grinding.”