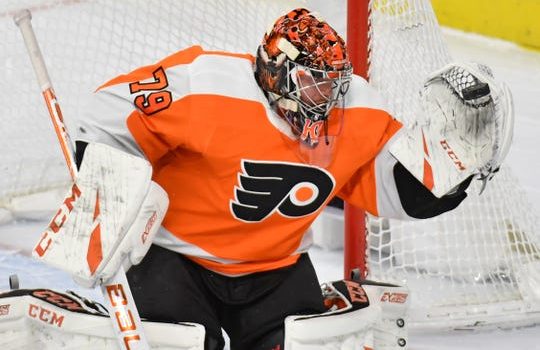 WHAT THE FLYERS GAINED BY LOSING TO NHL-BEST CAPS!

The Caps have owned the Metropolitan Division for years. If a Metro team wants to prove it’s for real, beating the Capitals handily is a surefire way to show it.

So how did the Flyers perform in their “measuring-stick” game?

To a man, every player who spoke to the media in the locker room afterward acknowledged the first period was a major disappointment. “They took it to us in the first,” Kevin Hayes said. A 16-5 shots-on-goal disadvantage and a mere 22.83 percent share of the 5-on-5 expected goals in a period will do that. But there was another postgame consensus: The Flyers rebounded in the final two periods, and more than one player argued that the action had tilted in their favor over the final 40 minutes of regulation.

Does that claim hold up to scrutiny? Sort of. The second period was the Flyers’ best by the numbers, as they gave up very little (six shots on goal, 0.29 worth of xG) while creating shots and chances of their own (12 shots on goal, 0.82 xG). Then, in the third, Philly tied the score, and put in the necessary work to force overtime and earn a standings point — their seventh straight game with at least one to their credit.

But the third period hinted at the gap still between the two clubs. While the territorial battle in the third was largely even (18-18 in shot attempts, 11-10 edge in shots on goal for the Caps), Washington created far more shot quality with its zone time than did Philly. In fact, the Caps ended up with a considerable 1.34-0.30 edge by 5-on-5 xG in the third (81.71 percent share). That actually was an even greater advantage than the one they racked up in the first.