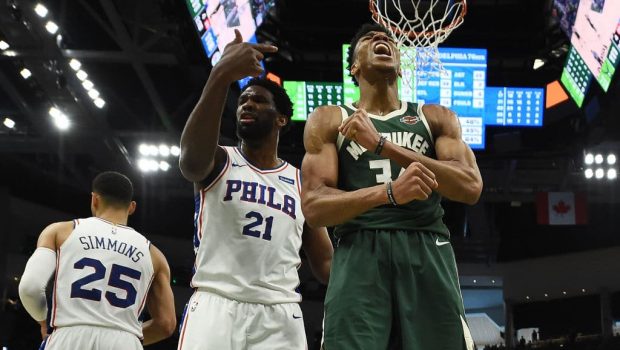 WHAT SIXERS BEATDOWN OF BUCKS SAYS ABOUT JOJO AND GIANNIS!

It’s been almost two whole days since the Sixers and Joel Embiid destroyed the NBA-best-record Milwaukee Bucks at the Wells, and Jojo is still crowing:

“The whole season I’ve been humble, but I want to be defensive player of the year,” Embiid said in a postgame interview on the ABC broadcast. “I think tonight showed it. I have to keep doing what I’ve been doing.”

As the 76ers’ defense shadowed Giannis Antetokounmpo, the Bucks’ franchise player, Philly exploded beyond the arc on the other end. Despite ranking just 24th in three-pointers per game entering Wednesday, the 76ers shot a blistering 21 for 44 from beyond the arc to tie a franchise record for made threes.

There was no easing into the holiday for the 76ers, who scored 38 points in the first quarter and had 69 points by halftime. All five of starters finished in double figures, with Tobias Harris scoring 22 points and hitting a dagger three-pointer to stave off a desperate Milwaukee comeback attempt. Furkan Korkmaz provided a key scoring boost with 16 points, including four three-pointers, off the bench.

But it was Embiid’s offense that proved decisive. Milwaukee loaded up its frontcourt by signing Brook Lopez and Robin Lopez (above) over the past two summers, yet the 7-foot twins had little hope of stopping Embiid. His dazzling night had a little bit of everything: Embiid drained open threes, fought hard to establish deep post position, executed smooth midrange jumpers, drop-stepped into contested turnarounds and flushed lob passes.

Few NBA players are serious candidates to be the MVP or the defensive player of the year, and even fewer can aspire to both awards. Antetokounmpo has been on the short list of candidates for both awards all season, but Embiid’s tour de force on Christmas was a reminder that he has the talent and the imposing presence to reach similar heights. Simply put, he was clearly better than Antetokounmpo on both ends of the court Wednesday.

“A lot of people have kind of forgotten who I am,” Embiid said. “When I’m needed, I’m going to show up. God willing, hopefully I’ll be healthy for the playoffs and it will be a different story [than last year].”

Antetokounmpo and Embiid are now split 3-3 in head-to-head matchups after Philadelphia drew first blood this season, and the two superstars have never squared off in the playoffs. Though their shared history is short, it includes memorable moments: Antetokounmpo poured in 45 points against the 76ers this past April, and Embiid had 40 against the Bucks in March.

The takeaway from the 76ers’ splendid holiday performance should be clear: Antetokounmpo and Embiid are the East’s two premier players, and their individual matchup will almost certainly determine who represents the conference in the NBA Finals come June.