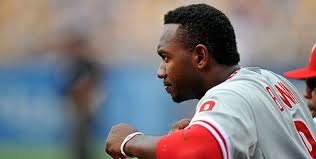 WHAT CAN BROWN DO FOR THE PHILS? NOTHING

Domonic Brown has struggled so far in 2014.

His .571 OPS ranks 33rd out of 35 qualified National League outfielders. His slugging  slugging percentage (.287) is below that of light-hitting teammate Ben Revere (.313). He has hit just one home run this season, has struck out in 19.3% of his plate appearances, has an fWAR of -0.3 and a staggeringly bad ISO of .064. And his reverse splits this year (he has an OPS of .967 against lefties and just .459 against righties) are bizarre.

In other words, Brown has been downright abysmal at the plate this year after what was an All-Star season in 2013. But as has been pointed out by others before, was Brown’s ’13 season really a good one, or was it supported by a ridiculously strong month of May?

But here’s the deal with Dom Brown. No matter how bad he looks right now, no matter how terrible his at-bats are, and no matter how little he gives you on defense and on the base paths, the Phillies really don’t have any alternative other than to stick with him.

Brown is still only 26 years old. He’s one of the few young players on the roster that conceivably has a long-term future with the team and has shown the potential to be a real power hitter in the Majors, if only for one incredible month. And more than that, the Phillies don’t really have anyone to replace him, even if they wanted to.

Darin Ruf isn’t a viable every day outfielder and shouldn’t be used as such when he returns from his oblique injury. There is no young player in the minors ready to come up.  There is no viable trade that another team would engage in that would improve the Phillies while not also destroying their long-term future, and there are no unsigned free agents out in the world that could make a difference either.

The fact is, Brown should continue to play, despite his struggles. Perhaps a couple days on the bench to clear his head wouldn’t be the worst idea, but nothing more than that. Brown isn’t going to figure this out getting one or two starts a week. He needs to make adjustments to the adjustments pitchers have made to him, and take advantage of the mistakes when they do happen.

The Phillies need to hope this is just an early-season slump and that he will figure this out. They need his power at the bottom of the lineup to make this offense work. They need their one potential young All-Star player to start playing like it.

There simply is no alternative. They have to wait. Brown is the Phillies’ everyday left fielder, for better or worse. Hopefully, they’ll start to see more of the “better” and less of the “worse” pretty soon.