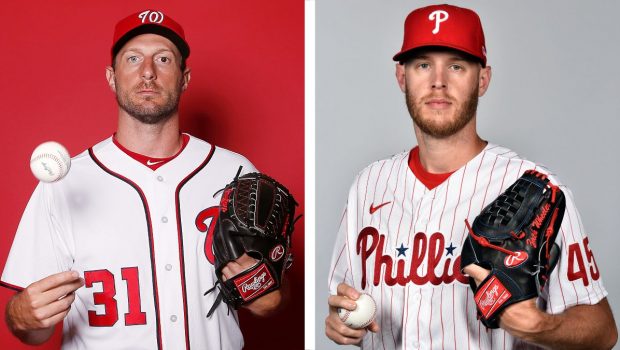 WHAT A WASTE: PHILS WHEELER’S GEM BEATEN BY NATS MAX!

Scherzer (5-4) struck out nine in 7 2/3 dominant innings, allowing one run on five hits. The three-time Cy Young Award winner lowered his ERA to 2.22 with his seventh straight start yielding two runs or less.

Soto provided the difference when he crushed an opposite-field drive to left for a 2-1 lead in the sixth. It was his 11th homer in 80 at-bats in Philadelphia’s hitter-friendly ballpark.

Rhys Hoskins led off the bottom of the ninth off Daniel Hudson with a double off the right-field fence. Travis Jankowski ran for Hoskins but got picked off after a 2-2 pitch in the dirt to J.T. Realmuto. Jankowski was hung up between second and third and catcher Alex Avila ran all the way out to tag him near shortstop.

Hudson then struck out Realmuto swinging and Brad Hand came in to get Brad Miller on a shallow fly for his 10th save in 12 chances.

Wheeler didn’t allow a runner until he walked Trea Turner to start the fourth. With two outs, Josh Bell hit a bloop RBI double to left for Washington’s first hit and a 1-0 lead. Andrew McCutchen made a sliding attempt, but couldn’t make the grab.

The Phillies answered in the bottom half. Jean Segura led off with a single and stole second. Realmuto’s RBI single tied it at 1-1. After Miller walked, Scherzer escaped trouble when McCutchen’s grounder hit Realmuto for the second out. Alec Bohm struck out to end the inning.

Wheeler and Scherzer combined to retire the first 15 batters before Bohm led off the bottom of the third with an infield single. Ronald Torreyes followed with a drive that center fielder Victor Robles tracked down in right-center.