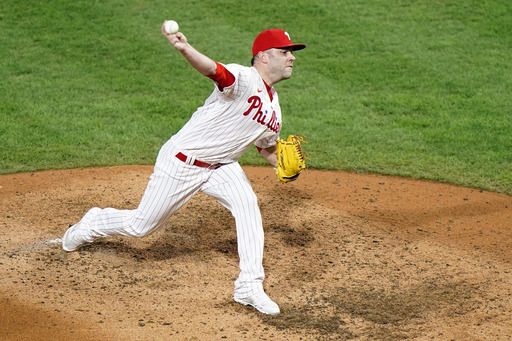 WHAT A RELIEF: PHILS ADDED DAVID PHELPS JUST IN TIME FOR THE RUN!

So, David Phelps, how did you like being traded from the Brewers to the Phillies?

Rather than hop on a commercial flight from Milwaukee to Philly and risk potential exposure to COVID-19 for both himself and his future teammates, Phelps drove.

He arrived at Citizens Bank Park a couple hours before Tuesday night’s 6-0 victory over the Nationals.

“I think what I personally bring is I’m comfortable pitching in leverage situations,” Phelps said.

“I think I would just caution a little bit about small sample size. If this was a 162-game season, it would have been a bad month for a bullpen. Trust me, I know the guys not only that got brought in [before the Deadline], but the guys that are here. It’s a good group. The calendar turned to September and we’re 1-0 [this month], so I think, going forward, I think that’s what we’re going to focus on, just winning games down the stretch.”

Phelps made the postseason as a rookie with the Yankees in 2012. He has not been back.

“If going somewhere gives me a better chance to do that, that’s what I want,” Phelps said. “I felt like I was on a playoff team in Milwaukee and I feel like I’m on a playoff team here. It’s been an exciting year of baseball. I’m happy to be here. Being back with Joe [Girardi], having people that I’m familiar with, makes the transition a lot easier.”

Girardi managed Phelps on the Yankees from 2012-14. The Yankees traded him to Miami in December ‘14, where J.T. Realmuto caught him for three seasons from 2015-17.

“I could sit here and talk all day about how great J.T. is,” Phelps said.

“The stuff has been playing,” he said. “I’ve been working myself into good counts, which has been incredibly helpful. That’s one of the biggest things for me — if I’m able to dictate counts, it goes a long way.”