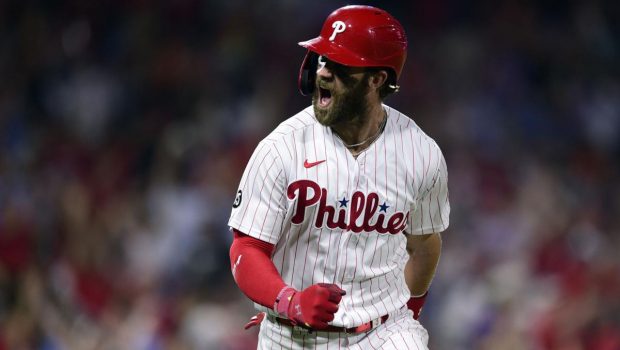 ‘WHAT A LINE-UP WE’RE ABOUT TO HAVE,’ PHILS HARPER SAYS!

Kyle Schwarber is expected to be in camp today and Castellanos will arrive, as he still needs to take his physical.

Harper said last Monday that he hoped the Phillies would sign Kris Bryant, Kyle Schwarber or Castellanos to fill their need for a big bat in left field.

The Phillies and Schwarber agreed on Wednesday to a four-year, $79 million contract. Harper said that morning that he hoped the Phillies were not finished making moves.

But he said he never expected anything like this.

“Definitely didn’t really think that,” he said. “Just because Casty is one of the best guys on the market, so you just never know what’s going to happen.

“It’s incredible. I would never have thought that would have happened. But like I said, you have to have the faith in [president of baseball operations Dave] Dombrowski and [principal owner] John Middleton to do their job, to get the team that’s best going out there. What a lineup we’re about to have. I mean, it’s a special thing to be able to have guys at the top of our lineup and in the middle of our lineup, pretty well-rounded, just the length of our lineup is pretty impressive. It looks good on paper, but you still have to go out there and give it your best effort. Still go out there and work hard.”

Harper and Castellanos were roommates when they played together on a national team as teenagers, and they share an agent in Scott Boras. They know each other well and occasionally communicate in the offseason.

“I think Nicky’s going to fit in with the city of Philadelphia really, really well,” Harper said. “He has that demeanor, he has that energy, that spark. He loves the game of baseball. He’s a grinder. Only two times he’s ever been on the [injured list] is with his broken thumbs. He plays every day. And he just loves the game. The thing about Nick is he brings that fire that you need, that passion, that energy. … He’s going to fit the mold really well. I think that’s one of the reasons why I really wanted him here, because he was going to fit that mold, and we needed players like that.

“He’s a guy that, when he’s on your team, you really like him, and when you’re playing against him, you’re like, ‘What is this guy?’ You know what I’m saying? ‘What’s he about?’ Not in a bad way, but like, ‘What’s he about?’ He’s definitely one of those guys, and I’m really excited to have him in our clubhouse.”

Some early reaction in the #Phillies clubhouse this morning about Nick Castellanos, courtesy of Bryce Harper and Rhys Hoskins. pic.twitter.com/42GXl9DoeH