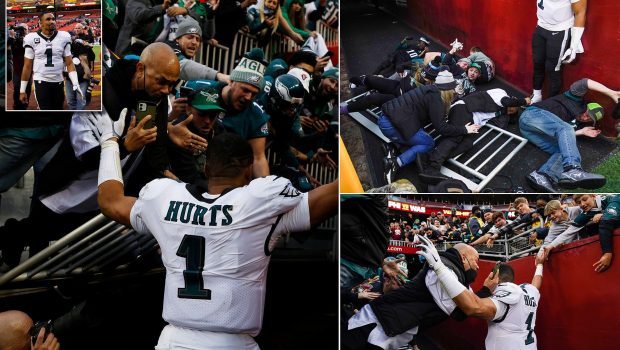 First the Washington Football Team collapsed against the Eagles.

Then its stadium collapsed on Eagles QB Jalen Hurts, who emerged unscathed.

A railing on the side of the tunnel leading to the visiting locker room at FedEx Field collapsed yesterday, causing several fans to fall and hit the ground as Hurts walked past.

None of the fans appeared to be hurt or need treatment at the scene.

“To our knowledge, everyone involved was offered onsite medical evaluation and left the stadium of their own accord,” the Washington Football Team said in a statement. “We’re very glad no one appears to have been seriously injured. The safety of our fans and guests is of the utmost importance and we are looking into what occurred.”

As a handful of them leaned over the railing — trying to slap hands with Hurts — it collapsed, and they fell approximately 6 feet to the ground, landing on the rail. Hurts sidestepped the falling fans and wasn’t hit.

At least five fans fell, but all got back up quickly, one of whom was helped by Hurts. They surrounded a smiling Hurts, who put his arms around them as one of the men who fell tried to take a selfie. Security guards then intervened and directed the fans to return to the stands.

“I’m just happy everybody is safe from it. That’s crazy stuff right there,” Hurts said after the game. “That was a real dangerous situation. I’m just so happy everybody bounced back from it, it seemed like. Passionate Eagles fans. I love it.”