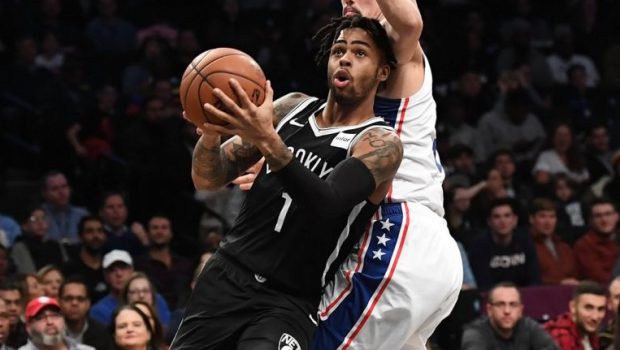 Nearly half the fourth quarter remained when he pulled Joel Embiid from the game.

D’Angelo Russell snapped out of a slump with 13 of his 21 points in the second half, and the Brooklyn Nets kept the 76ers winless on the road with a 122-97.

The 76ers committed 28 turnovers, most in the NBA this season, leading to 39 points for the Nets.

”That is not who we are,” Brown said. ”And I give credit to Brooklyn, but that is an unacceptable performance.”

Rondae Hollis-Jefferson also scored 21 points and Caris LeVert had 20 for the Nets. They took a small lead into halftime thanks to 17 Sixers turnovers, then blew it open with a 41-point third quarter that was one of the biggest in Barclays Center history.

They kept pouring it on in the fourth and Brown removed Embiid and Simmons facing a 24-point deficit.

”I would say turning the ball over a lot of the time is being lackadaisical or trying to force something that isn’t there,” Russell said. ”I think everybody was aggressive tonight, 1 through 5.”

Embiid finished with 16 points and 15 rebounds but got only eight shots a day after going for 39 points and 17 rebounds in a victory over Detroit. Simmons had 20 points and 12 boards.

”It’s not Golden State. We shouldn’t lose a game to Brooklyn by that many points,” Embiid said. ”We didn’t compete.”

Russell was only 4 for 12 for eight points in the first half, a game after the former No. 2 pick sat the entire fourth quarter in the Nets’ loss to Houston after going 5 for 14.

But he had nine points in the third and he was only on the bench as the final minutes ticked down this time because there was no crunch time.