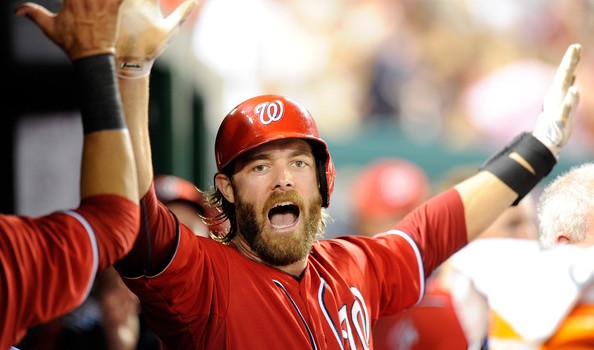 The crowd was small last night at Citizens Bank Park, which was understandable since the Phillies are long out of the pennant race and the Washington Nationals are 9 1/2 games behind the NL East-leading New York Mets.

Oh, right. The NFL team in town was playing on national TV down in Atlanta.

In front of just more than 15,000 fans, on a night the loudest cheer came when the Eagles took a lead down in Atlanta, the Nationals beat the Phillies, 8-7, in 11 innings.

Former Phillie Jayson Werth hit a grand slam in the fifth and then a solo home run in the 10th. Jonathan Papelbon, a former and hated Phillie returning for the first time since a July trade, gave the lead back in the bottom of that inning. The Nationals won because second baseman Andres Blanco’s throw got away from Phillies catcher Cameron Rupp and allowed pinch hitter Danny Espinosa to score on Yunel Escobar’s chopper in the 11th.

That drama unfolded, but it felt hollow somehow. By the time the game ended, one could hear individual conversations in the stands. The Nationals remain 9 1/2 games back with 19 games to play. They are stuck in-between, too far back for pennant race excitement, too far from the end to give up hope.

“It would feel great if we weren’t 9 1/2 games back. You get the sense it’s too little too late,” Werth said. “Anything can still happen of course, but it’s been a tough go. We didn’t stay healthy. Like I said, this game’s a perfect example. We hit, we don’t pitch. We pitch, we don’t hit.”

In that way, the season played out in one game Monday night. Part of the trouble has been that key Nationals, like Werth, were gone for much of this season.

Nationals Manager Matt Williams dropped Werth from the leadoff spot to the cleanup spot this weekend in the hopes of harnessing his recent hot streak to drive in runs instead of create them. Werth’s five RBI on Monday were his most in a game since April 2014.

Werth spent most of the first half limited by injury — first shoulder surgery, then a broken wrist. As of Monday, despite an average around .300 during a 23-game on-base streak, Werth is hitting .230 this season, which was largely spent recovering from injuries, then rediscovering timing in their aftermath. He has driven in 36 runs this season and scored 44. Last season, he drove in 82 and scored 85.