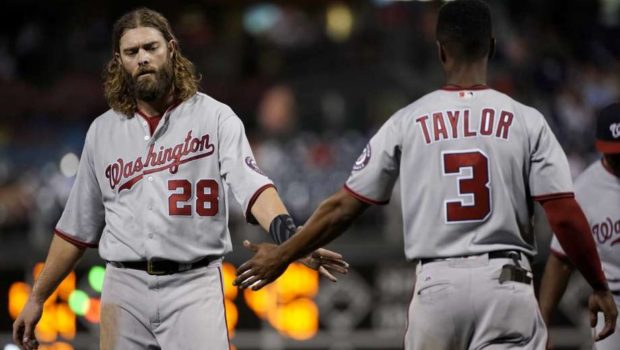 Michael Taylor homered and A.J. Cole allowed one run as the Washington Nationals beat the Phillies 3-1.

Ryan Zimmerman doubled and former Phillie Jayson Werth (above left) drove in the other run for the NL East champion Nationals.

Bryce Harper has been out since he slipped on a wet base and hyperextended his left knee on Aug. 12. The five-time All-Star has missed 42 games, and had hoped to return last night.

He could be back tonight.

Odubel Herrera homered for the Phillies, who have been playing better of late but entered one game ahead of the Giants for the worst record in baseball.

“The bats have been silent for a few days,” manager Pete Mackanin said. “We just couldn’t get anything going.”

Cole (3-5) struck out five and walked two while giving up six hits.

“He stayed out of the middle of the plate,” Baker said.

Sean Doolittle pitched a perfect ninth for his 21st save in 21 chances with the Nationals since being acquired from Oakland on July 16.

“He pitched extremely well,” Mackanin said. “When he pitches, we all expect to win.”

Taylor’s 17th homer this season, a 398-foot blast to left-center, gave the Nationals a 2-0 lead. The center fielder, pushed into a starting role when Adam Eaton tore his ACL in April, will be expected to continue producing in the playoffs.

“We need that,” Baker said.

Cole kept the Phillies off the board until Herrera snapped an 0-for-17 skid with a solo shot, his 14th, on a 1-2 pitch with two outs in the fourth.

The Nationals struck out 13 times.