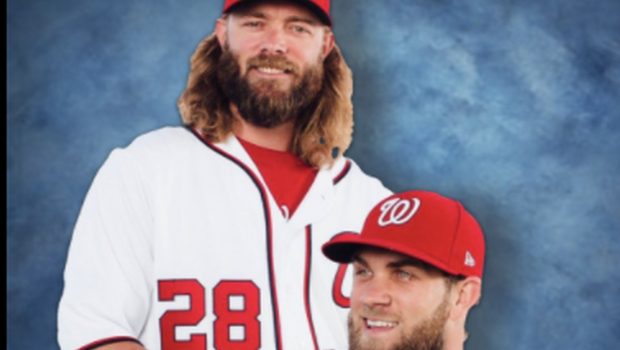 Jayson Werth visited his old team and former Nationals teammate Bryce Harper yesterday on the one-year anniversary of Bryce Harper deciding to leave Washington to sign a 13-year, $330 million contract with the Phillies.

Werth spent six seasons sharing an outfield with Harper but before his days in Washington, he helped the Phillies win the World Series in 2008. His play in Philly earned him a seven-year, $126 million deal with the Nationals in 2011.

Harper’s exit from DC is a sore subject for Nationals fans, even though a World Series championship definitely helped numb the pain. Werth explained in a story by NBC Sports Philadelphia’s Jim Salisbury that he always had a hunch Harper could end up in Philly.

“I always thought this would be a possible destination for him, even way back when, for a bunch of reasons,” Werth said. “Kind of where the team was, the money was right, the owner was right, the town’s right.

“But more than anything else,” Werth added with widening eyes, “Citizens Bank Park is just an awesome place to hit. We always talked about that.”

Werth clarified he doesn’t want anyone to think he was pushing Harper to Philly, just that as players they naturally had plenty of conversations about other ballparks. And it’s hard to argue with that.

Before he played a single game for the Phillies, Harper was Citizens Bank Park’s all-time leader in slugging percentage. In 2019, Harper hit the second-most homers of his career (35) and his second-highest slugging percentage as well.

Werth even enjoyed a nice bump hitting in Philadelphia. During his time with the Nats, Werth his .291 with a .922 OPS to go along with 15 home runs and 45 RBI in 52 trips to Citizens Bank Park.

Between the 81 games in a hitters ballpark and a $330 million contract without the deferred payments the Nationals reportedly offered to Harper last year, it makes a decent amount of sense he decided to take his talents north.

But hey, the Nationals won a World Series the following season, and in epic fashion I might add, while there’s no guarantee the Phillies get there any time soon. I mean, have you seen their pitching staff outside of Aaron Nola and Zach Wheeler?

So Bryce is happy and Nats fans are happy. Everyone wins, right?