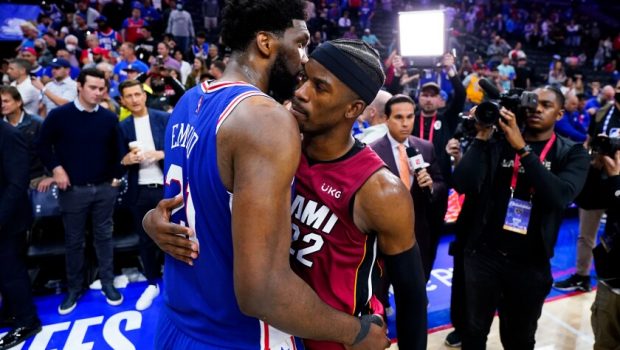 Sixers center Joel Embiid did everything he could, especially considering he has a broken face, a torn tendon in his thumb and just got out of concussion protocols last week.

Which left him totally devoid of energy, and if you doubt that count the times he bent over and tugged at the bottom of his shorts, which is a dead giveaway of exhaustion.

But he somehow got 20 points and 12 rebounds in 44 minutes as Philly fell out of the playoffs.

And he had a lot to say afterward:

“When you have size and toughness, that goes a long way,” Embiid said.

“When you have someone like (Heat forward) P.J. Tucker — great player, but it’s not about him knocking down shots. It’s about what he does, whether it’s on the defensive end or rebounding the ball. Defensively, plays with so much energy. He believes that he can get from Point A to Point B, and he believes that nobody can beat him, and he’s tough. He’s physical and he’s tough.

“They have a few of those guys. . .Since I’ve been here, I’d be lying if I said we’ve had those type of guys. Nothing against what we have. It’s just the truth. We never have P.J. Tucker. That’s really what I’m trying to say.

“I think physicality, especially when it gets to the playoffs or the later rounds, you need that. You need those guys that are really tough.”“

“Whatever it takes to help this team to continue to grow,” said Harden, who would become a free agent if he declined his $47 million option for 2021-22.

So, Joe, what do you think of Harden coming back?

“Yeah, obviously there’s a lot of decisions to be made over the summer,” Embiid said.

“Obviously, he’s got to re-sign for that to happen. I feel like, every year, even last year losing to Atlanta that we were good enough to go farther and win it all.

“This year, I feel the same. Maybe we didn’t have enough time together to figure it out. Maybe we just weren’t good enough. I feel confident that I’m going to get better. I’m going to come back even better and make sure that I do everything possible to accomplish what I want.”