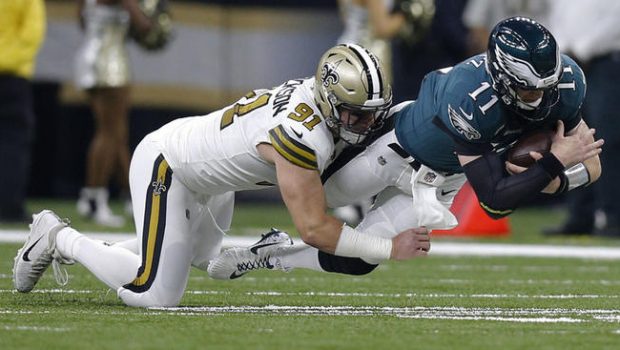 Eagles quarterback Carson Wentz completed 19 of 33 passes for 156 yards and three interceptions in the 48-7 loss to the Saints.

He added a six-yard run.

Wentz took a shot off of play action with the Eagles down by 10 early in the second quarter.

The pass was slightly underthrown, picked by Marshon Lattimore, and propelled the Saints to another touchdown drive, putting the Birds behind by three scores early.

Wentz went on to throw two more interceptions, but both came in the Eagles’ final two drives when they were just trying to get the ball downfield.

The game snapped a streak of six straight outings in which Wentz threw for multiple scores and at least 275 yards. He had thrown just two interceptions during that span.

The Eagles are struggling, but can make up some ground next Sunday against a Giants defense that has been solid against the pass, ranking 13th in the league in opponent passer rating at 90.9.

Wentz did post a season-high 122.2 rating against them in Week 6, with three touchdowns and no interceptions.