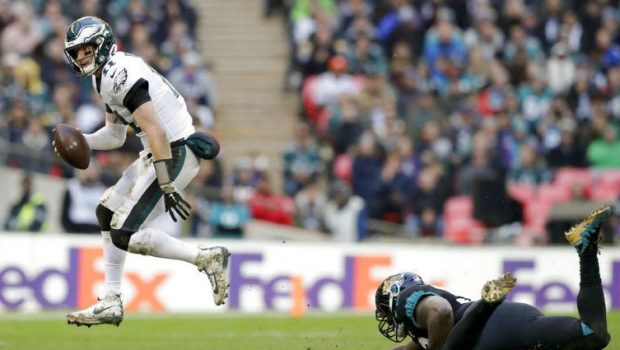 WENTZ AGAIN PLAYING LIKE AN MVP AS EAGLES HIT THE MID-POINT!

After the crushing loss to the Panthers the week before, the Eagles went to London’s Wembley Stadium in front of 85, 870 fans and secured their 4th win of the season 24-18 over the Jacksonville Jaguars.

They were able to lock down the victory with a better ground game, getting crucial 1st downs with Josh Adams moving the chains in the final quarter, giving QB Carson Wentz the luxury of the Victory Formation 3 times as the clock ticked off to 0.00.

Birds running backs gave them a more balanced attack with Adams gaining 61 yards on 9 carries for a 6.8 per carry average. The 28 runs along with Wentz’s 30 passing attempts gave the Eagles the better run/pass ration conducive with winning NFL games.

Wentz had a shaky 1st quarter, committing two turnovers, and then he settled down and played a very good game, going 21-30 with 3 TD passes to Dallas Goedert, Zach Ertz, and Wendell Smallwood.

After missing the first two games, Wentz appears to be rounding into MVP candidate form from a year ago.

His stats this year are an impressive 13 TD passes, 2 interceptions with a QB rating of 109.6 with 8 games remaining.

With the bye week here to rest up some injured players, the Birds are in decent shape to take on the Dallas Cowboys on November 11, 8:20pm/NBC, they will make their NFC East division run at 4-4 looking ready to get on a playoff roll once again.