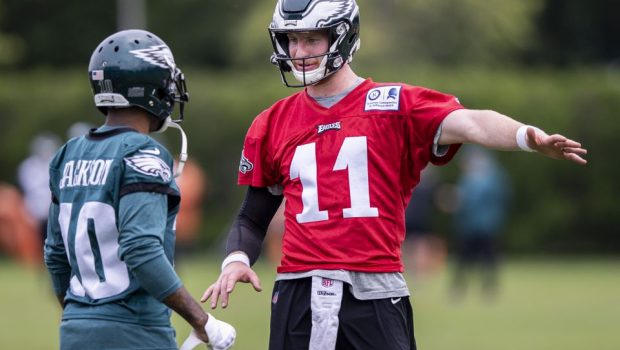 WENTZ OR NO WENTZ, EAGLES GOAL TONIGHT IS TO STAY HEALTHY!

Preseason game No. 1 for the Eagles takes place tonight against the Titans at Lincoln Financial Field.

To belabor the obvious, the top goal is to come out of the game with no injuries to the 22 starters. Next is to have no injuries to any back up players too.

HC Doug Pederson is reluctant to name franchise QB Carson Wentz to touch the Linc gridiron for this game. Even though Wentz has new weapon in DeSean Jackson to get further in sync with, they appear to be doing just fine in training camp practices.

NFL preseason football is mostly for rookies and free agents acquisitions to get their feet wet with their new team.

So will Wentz play, or not? History of Wentz’s short NFL career says no, he does fine without it.

As a rookie in 2016 Wentz was dinged up a bit and held out of preseason. One week before the regular season began, starting QB Sam Bradford was traded to the Vikings, even back then Pederson had the confidence to start a green rookie in his 1st NFL game! How did he do?

Wentz smoked the Cleveland Browns 29-10 on September 11, 2016! Wentz went 22-37 with two TD passes, a QB rating of 101.0! I’m guessing they believe he can do the same in this years’ opening day, with three years of NFL experience under his belt, a new multi-million dollar contract, also a trimmed down physique entering his 4th NFL campaign.

That is the ultimate goal of the Eagles preseason schedule: get Carson Wentz 100% ready to beat the Washington Redskins, September 8, 1pm at the Linc.