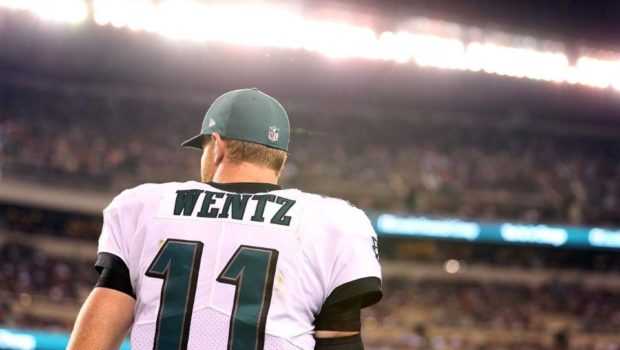 EAGLE WENTZ LOOKS ELITE! BUT SHAKY O-LINE BETTER HAVE HIS BACK!

Carson Wentz completed 6 of 10 passes for 129 yards and a 104.2 passer rating. The Eagles will take that stat line every day. But what had to concern them was the number of hits Wentz took and the occasions when Wentz avoided hits that, perhaps in the regular season, won’t be near misses.

Wentz was only sacked once but was under duress on too many throws for coach Doug Pederson’s liking. The best example of pass protection came with 14:54 to play in the second quarter, when Pederson inserted backup Matt McGloin into the game. You’d be hard-pressed to find an example of a past Eagles starting quarterback not playing at least one half in the third preseason game:

Carson Wentz can be special if Eagles keep him upright