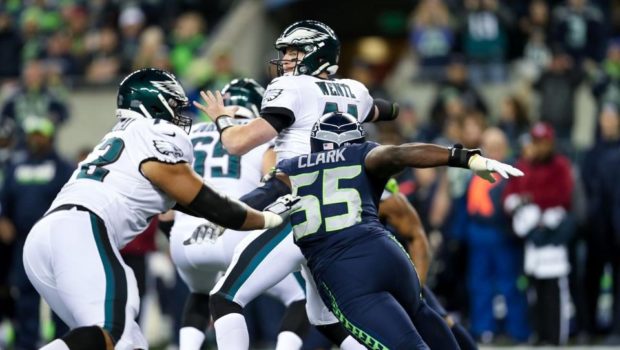 WENTZ AND THE EAGLES MAY RUE THE ONE THAT GOT AWAY!

Carson Wentz took responsibility after the Eagles’ nine-game winning streak ended last with a 24-10 loss to the Seattle Seahawks.

And he should have.

Wentz threw for a season-high 348 yards and a touchdown, but he also fumbled at the 1-yard line on the opening drive of the second half when the Eagles were on the verge of pulling even.

”We were rolling there. You just can’t put it on the ground. … I saw the goal line and knew it was going to be close. I made that extra lunge and it cost us,” Wentz said. ”That’s the story of the game, really. We turned the ball over and they didn’t.”

Still, everything remains in the Eagles’ control. They’re on the cusp of clinching the NFC East. They can still nab the No. 1 seed in the NFC and get home-field advantage in the playoffs.

Yet Seattle (8-4) exposed the Eagles.

They can be run on, although it helps to have a quarterback like Russell Wilson.

Their run game can be stopped, although having to play from behind in the second half limited the amount of running opportunities.

And as good as Wentz has been so far this season, he’s still a second-year quarterback prone to occasional mistakes.

None was bigger than his fumble. The Eagles (10-2) went down the field with ease to open the second half and had a chance to tie it at 10. Wentz was headed for the end zone when Sheldon Richardson stripped the ball free just shy of the goal line, and it bounced over the end line for a touchback – Seattle’s ball at the 20. Eleven plays later, Wilson hit Tyler Lockett on a 1-yard TD pass to make it 17-3.

”It’s just ball security,” Philadelphia coach Doug Pederson said. ”You know when you’re down in that area – and I applaud the fact that he was going for the end zone and the touchdown – you know you’re going to be in some traffic. … He’s made a lot of football plays. I’m sure he’s sick to his stomach about that one, but he’ll learn from it, get better and move on.”

Wilson was brilliant while throwing for three scores and using his athleticism to create plays few others can even attempt. But it was Seattle’s defense that may have put together arguably its best performance of the season. Wentz may have thrown for 348 yards, but the Eagles finished with 98 yards rushing and just 8 yards rushing in the second half.

”We knew what we were capable of and they shouldn’t have even scored that one that they got,” Seattle linebacker K.J. Wright said.

0 thoughts on “WENTZ AND THE EAGLES MAY RUE THE ONE THAT GOT AWAY!”