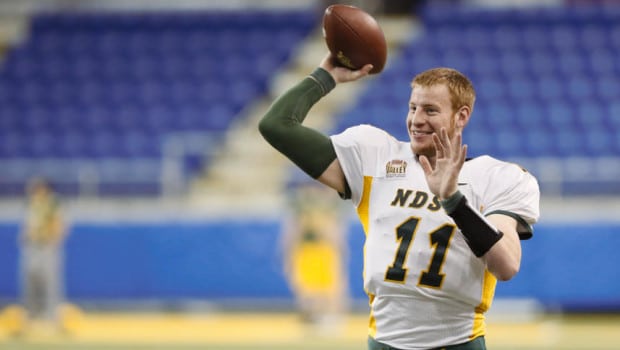 WENTZ AS FACE OF EAGLES’ FRANCHISE: ‘I THINK IT’S COOL’

Everyone assumes that the Rams will take Jared Goff with the first pick in Thursday’s NFL draft and the Eagles will get Carson Wentz at No. 2.

But whether Wentz goes to the Rams or the Eagles, the expectation is that he’s going to be the face of the franchise for years to come based on his draft position and what the team gave up to get the pick. That is a big step up from running the North Dakota State offense, but it is one that Wentz feels well suited to take.

“I think it’s cool,” Wentz said, via the New York Post. “I’m one that doesn’t let the pressure or any of the outside kind of scrutiny, all those things, really get to me. I’ve dealt with it my whole life, but obviously it’s gonna be to another scale now. It is what it is, it comes with the territory, and you gotta be able to just block it all out. You just control what you can control, and just hopefully go win games and keep getting better.”

Wentz passed on comparing himself to a current NFL starter while citing his competitiveness, leadership and “mental processing” as the reasons why he’s confident that he’ll be successful as a professional. Whether he goes first or second, one team will be making a sizable bet that he’s correct in that assessment.