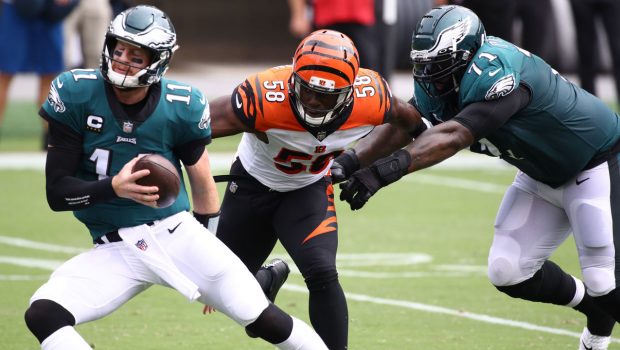 But that’s only because there were no fans allowed in the Linc because of pandemic precaution.

So Carson Wentz and Doug Pederson couldn’t hear the millions of Eagles fans booing at their flat screens at home.

Because the so-called franchise quarterback and the Super Bowl 52-winning coach continue to perform like high schoolers, and the Eagles wound up tying the Cincy Bengals 23-23.

Joe Burrow tossed a pair of touchdown passes to Tee Higgins in regulation and Wentz dove into the end zone for the tying score in the final minute.

The Birds Jake Elliott lined up for a 59-yard field goal with 19 seconds left in overtime, but a false start on Matt Pryor forced the Eagles to punt it away and play for the tie.

Instead of having Elliott attempt a 64-yarder as the clock ran down, Pederson elected instead of going for it.

Facing an 0-3 start for the first time since 1999, Wentz drove the Eagles 75 yards in the final three minutes. He barreled 9 yards on third-and-6 to the Bengals 19 and then ran in from 7 with a head-first dive into the end zone. Elliott’s extra point tied it with 21 seconds left.

Neither team could do anything in overtime.

Burrow, the Heisman Trophy winner and No. 1 overall pick, calmly picked apart the secondary in the second half, completing 31 of 44 for 312 yards. He’s still seeking his first win since leading LSU to the national championship in January.

The Bengals took a 17-16 lead on their first drive of the third quarter. Burrow completed all seven of his passes for 78 yards, including a pair of third-down conversions. He finished it off with a 4-yard TD pass to Higgins for a 17-16 lead.

Wentz was picked by LeShaun Sims on the ensuing possession and the Bengals took over at the Eagles 44. They turned that into a 31-yard field goal by Randy Bullock and a 20-16 lead. Bullock hit a 25-yarder to extend the lead to 23-16 with 3:05 left.

Burrow tossed a 1-yard TD pass to Higgins for a 10-6 lead late in the second quarter. But Wentz and the Eagles answered quickly. On third-and-5 from the 26, Wentz hit a wide-open Greg Ward down the right side for a TD and a 13-10 lead.

Jalen Hurts took a snap out of shotgun with Wentz lined up wide at receiver and ran 8 yards for a first down on the opening drive of the third quarter that ended with Elliott kicking a 54-yarder to make it 16-10.

Philly’s opening series ended when Wentz’s pass on third down was deflected at the line and picked by Logan Wilson at the Bengals 44.

Wentz has thrown multiple picks in three consecutive games. He hadn’t done that in two straight games before this season. Wentz hasn’t thrown more than seven interceptions since his rookie year but already has six in three games.

One thought on “WENTZ AND PEDERSON SUCK AGAIN, EAGLES TIE BENGALS AT 23!”