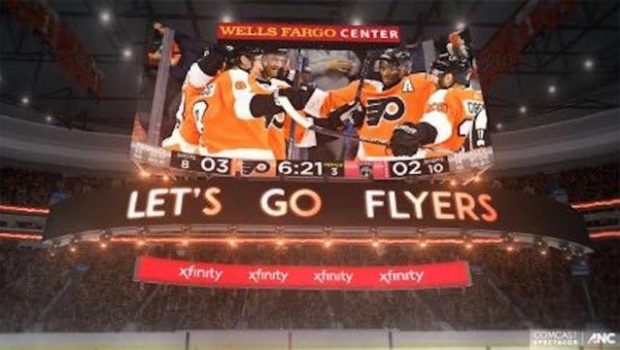 WELLS FARGO CENTER WAY UPGRADED, FLYERS NOT SO MUCH!

Unfortunately, the product on the ice has been cheaped out.

There are $25 tickets at a refurbished standing-room-only area at the highest point inside the Wells Fargo Center. Too far away for a good view? No worries, Comcast Spectacor installed a Kinetic 4K centre-hung scoreboard that makes Gritty look like Godzilla on the big screen. There’s even a sports book for fans who want to place a wager on the home team while they’re sipping a craft cocktail called “The Sexy Franklin .”

But the $265 million overhaul to the arena the Flyers share with the 76ers hasn’t exactly trickled down to the roster. The top-shelf amenities, fireplaces and artwork serve as nothing more than posh diversions from the action on the ice. The Flyers are +3600 to win it all and there isn’t an arena upgrade that can save that number.

The Flyers haven’t won the Stanley Cup since 1974 and 1975, currently the fourth-longest drought in the NHL. The Flyers missed the playoffs for the fourth time in seven seasons, haven’t made it to the second round since 2012 and will hit 10 years this season since their last Stanley Cup Final appearance.

The new addition the Flyers are really counting is the one on the bench.

Alain Vigneault, known for quick fixes and who led Vancouver and the New York Rangers to the Stanley Cup Final, was hired as the latest coach. Vigneault certainly boasts the credentials that prove he’s capable of turning the Flyers into winners. He has coached 16 NHL seasons for the Montreal Canadiens, Canucks and Rangers and his teams have made the playoffs 11 times.

“He’s a coach that knows what it takes to go far in the playoffs and win,” Flyers centre Sean Couturier said.

The Flyers’ gamble on college coach Dave Hakstol backfired and so did their commitment to former general manager Ron Hextall when he laid out a long-term rebuilding plan that was short on immediate playoff results. The Flyers hired Chuck Fletcher last December in hopes he can resuscitate the franchise and make the orange-and-black again known for more than their googly-eyed mascot.

The champion St. Louis Blues showed it could be done — they were the worst team in the NHL in January.

The Flyers hope their hectic early season travel schedule doesn’t derail their efforts: Philadelphia plays a final preseason game in Switzerland, opens the season in the Czech Republic, plays one home game on Oct. 9 and then heads to Western Canada for three games in five days. Did someone say jet lag?