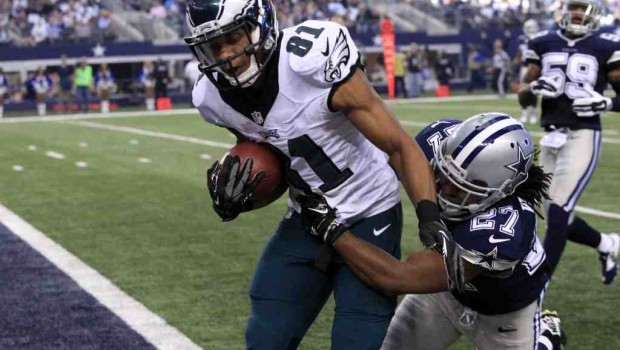 The Cowboys were worried about Philly’s fast-break offense, and with good reason.

The Eagles set the tone immediately with a whirlwind opening march that chewed up 80 yards over nine plays in just three minutes. Philly would never look back.

Excising ‘butt fumble’ ghosts, Mark Sanchez passed for 217 yards and deftly led an attack that piled up 464 total yards. Under the tutelage of Chip Kelly, Sanchez is worlds beyond his Jets days. The misreads and mental gaffes still bubble up, but he doesn’t force throws and he’s more precise on designed rollouts and passes outside the pocket.

The Cowboys came in hoping to do what they do best: Dictate the pace of the game by riding DeMarco Murray behind the NFL’s finest offensive line. Not today, with Philly building an early lead and holding Murray to a manageable 73 yards off 20 attempts. Two weeks after allowing 53 points to thePackers, the Eagles successfully shut down lanes and won the battle in short-yardage situations.

Coming off last week’s 130-yard explosion, LeSean McCoy burned through the Cowboys for 159 yards off 25 carries. Shady is every bit the runner he was last season when the blocking holds up. He crossed the 1,000-yard mark on Thursday and showed great patience and vision against a Dallas run defense that allowed 100-plus yards for the eighth time this season.

Eagles corners Cary Williams and Bradley Fletcher held Cowboys wideout Dez Bryant to one catch in the first half and just 73 yards off four grabs. Most of that came with the game out of hand. Philly’s sticky secondary put Tony Romo in hot water against an Eaglesdefense that piled up four sacks and five quarterback hits.

Eagles players told FOX’s Troy Aikman that they felt well-conditioned for the short week and certain of getting away with a stripped-down game plan by tiring Dallas out. It worked. The Cowboys looked gassed by the end of the first quarter, triggering Dez Bryant to roam up and down the sideline bellowing at Dallas defenders. The dressing down had no effect.

Jeremy Maclin continued his campaign for Comeback Player of the Year by carving up the Cowboys’ secondary for 108 yards off eight catches. When Sanchez wasn’t targeting Maclin, he continued his trend of finding rookie Jordan Matthews. With four grabs for 51 yards, Matthews is averaging 93.3 yards per game over his past four outings.