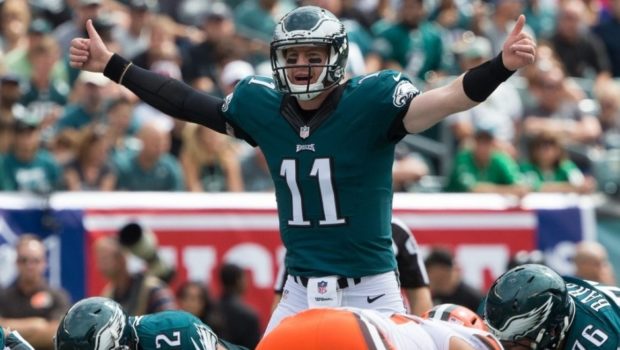 That was quite an impressive debut for Eagles quarterback Carson Wentz!

The No. 2 overall pick of the NFL draft showed in just over five minutes of action why the Eagles traded three players and five draft picks to move up and select him.

Wentz, who became the starter when Sam Bradford was traded to the Minnesota Vikings, hit a lull in the game, but came back with a 35-yard third-quarter touchdown pass to Nelson Agholor that sealed the Eagles’ 29-10 win over the Cleveland Browns.

Yes, this was against the Browns, the perennial NFL doormat and a team that has now lost a NFL-record 12 straight opening-day games.

The Browns, who not only passed on Wentz in the draft, but didn’t mind telling the world they did it because they didn’t believe he was a top-20 quarterback, won the coin toss and deferred.

They wanted Wentz on the field for that opening drive.

Wentz went 4-for-5 for 56 yards and a 19-yard touchdown pass to Jordan Matthews on the opening drive. And his one incompletion was a drop by Matthews.

It was more than the numbers, however, that made Wentz’s first drive so impressive. It was the way the former North Dakota State star handled the situations presented him.

After two running plays began the drive and left him with a 3rd-and-3 from the 32, his cadence forced Xavier Cooper to jump offside for the automatic first down.

When Matthews dropped the pass that would have been an easy first down, Wentz came back and completed passes of 13 and 11 yards to tight ends, Zach Ertz and Brent Celek.

After Cooper’s offside penalty, Wentz didn’t face another third down on the drive and on second-and-9 from the 19, went to Matthews who got a step behind 33-year-old nickel back Tramon Williams for the touchdown.

His final numbers for the day were 22-for-37 for 278 yards with two touchdowns and no interceptions for a quarterback rating of 101.0

That’s a pretty good day, even if it was against the Browns, and it all began with that opening drive.