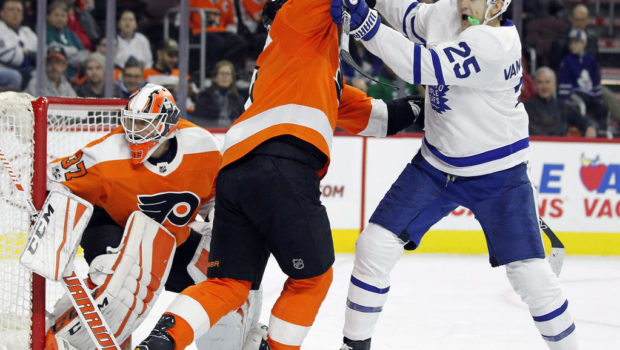 Sean Couturier broke a tie with 2:55 left and the Flyers beat the Toronto Maple Leafs 4-2 for their fourth straight victory.

Couturier and Claude Giroux each had a goal and an assist, and Travis Konecny also scored as the Flyers halted a six-game home losing streak. Scott Laughton added an empty-netter, and Brian Elliott made 20 saves.

Couturier’s career high-tying 15th goal of the season gave the Flyers a 3-2 lead.

”I just tried to shoot as hard as I could,” he said.

Giroux set it up with a between-the-legs pass while facing the boards that Couturier corralled and shot over goalie Frederik Andersen’s left shoulder.

”He’s so good,” Couturier said. ”You have to expect those plays from him.”

Giroux couldn’t even describe the pass, saying he saw Couturier and instinct took over.

The Flyers opened a five-game homestand with their first victory on home ice since Nov. 9 against Chicago. The Orange and Black had won three in a row – all on the road – to stop a 10-game skid, quieting calls for Hakstol to be fired.

”The difference has been we’re taking advantage of our good play,” Hakstol said.

Patrick Marleau and James van Riemsdyk scored for the Maple Leafs, whose three-game winning streak was snapped in the opener of a three-game road trip.

The Maple Leafs played without star center Auston Matthews (upper body) for the second consecutive game. Matthews was injured late in the third period of Saturday’s win over Pittsburgh when he collided with teammate Morgan Rielly and is day to day. Toronto dropped to 5-1 without him.

”I didn’t like the third,” coach Mike Babcock said. ”To me, we gifted two goals.”

Konecny’s shot 5:36 into the third period tied it at 2. Konecny blocked Andersen’s clearing attempt, keeping the puck in the Toronto zone, and wheeled around at the blue line with a wrist shot that first hit the stick of the Maple Leafs’ Dominic Moore before deflecting over Andersen.

It looked as though the Flyers were going to return to their losing ways at home when van Riemsdyk put the Maple Leafs ahead with 3:10 left in the second period on a power-play goal that made it 2-1. After Jakub Voracek went off for tripping, van Riemsdyk netted his 15th of the season after deflecting Rielly’s wrist shot from the point.

Giroux opened the scoring with a slap shot that beat Andersen at 9:21 of the first. Couturier set up the goal by winning a faceoff, and Giroux unleashed a hard one-timer to Andersen’s blocker side.

Babcock was animated after the goal because he didn’t like that Marleau got kicked out of the faceoff by the linesman and was replaced by Zach Hyman.

Toronto tied it 27 seconds later when Marleau’s wrist shot from a sharp angle went off Elliott’s arm. It was the 1,100th point of Marleau’s career.

One thought on “A WELCOME HOME! FLYERS BEAT LEAFS 4-2 FOR 4TH STRAIGHT!”