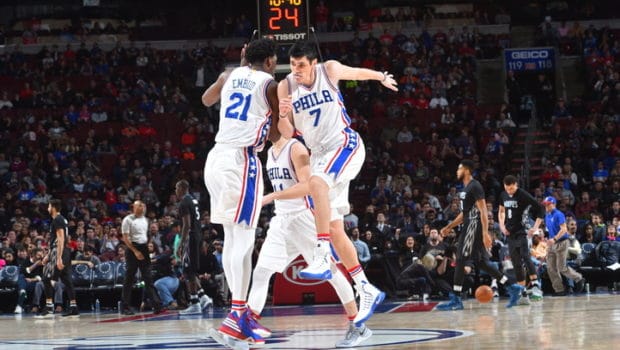 Ersan Ilyasova scored 11 of his 18 points in the fourth quarter in his first home game since he rejoined the Sixers, Joel Embiid had 23 points and 15 rebounds, and the Sixers beat the visiting Hornets 110-99.

“I told him, ‘Let’s do whatever we had going on last year,’ ” Embiid said. “He played great. Everybody had a great second half. But I was excited to have him back.”

Ilyasova played 53 games for the Sixers last season before he was traded to Atlanta. The Hawks waived him this week and he was enticed to reunite with a familiar organization ready to make a run at the postseason.

Ilyasova delivered a flawless fourth (4 for 4 from the floor, sank both free throws) that compensated for Embiid’s scoreless quarter. Embiid had been otherwise dominant in a lopsided matchup against Dwight Howard.

The Sixers won their 13th straight game at the Wells Fargo Center.

“I think, for me, I need that energy,” Embiid said. “We’ve got to put on a show. It’s great, especially if we make the playoffs, it’ll be louder than usual.”

The Sixers were coming off an impressive 108-97 win over the Cleveland Cavaliers on Thursday night that ended an 11-game losing streak against the Eastern Conference champions. Coach Brett Brown said playing the second of a back-to-back at home against a Hornets team badly in need of victories would be a nice test.

“We’re closer than we’ve ever been to achieving a pretty significant goal. We don’t feel like we’re there at all, and I don’t see complacency creeping in there,” Brown said. “We’re playing a team in desperation mode.”

Embiid, playing with four fouls, crashed to the court on a hard foul in the third and instantly grabbed his lower back. Embiid was slow to rise but did and made two free throws. He brushed off his discomfort and stormed down the court on the next possession for a bucket that cut the Sixers’ deficit to 80-74 through three.

While Embiid dominated, the Hornets got nothing out Howard. He picked up three fouls in the first quarter and played only 10 minutes for the half. He heard one of the loudest ovations of the night when he clanged two consecutive free throws in the third quarter and earned fans a free dessert from a fast-food joint.