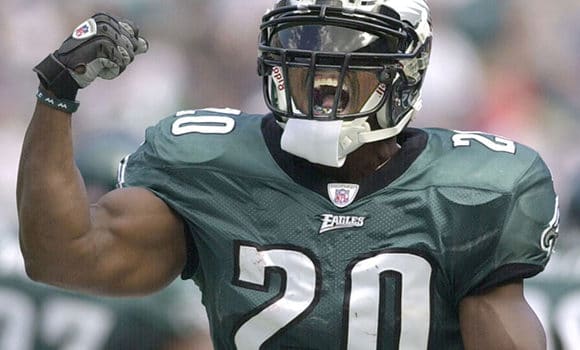 WELCOME BACK BRIAN DAWKINS: EAGLES MAKE HIM A SCOUT!

The Eagles and then-big boss Joe Banner made the numb-nits decision in February 2009 to let the great safety Brian Dawkins walk into free agency:

Where he promptly signed with Denver and had two more Pro Bowl years.

The Eagles yesterday welcomed back Dawkins, an eight-time Pro Bowl selection and a member of the club’s Hall of Fame, by adding him to the team’s scouting department.

Dawkins is the franchise’s inaugural recipient of the Nunn-Wooten Scouting Fellowship, a new program launched by the NFL aimed at introducing former players to the world of player personnel and the duties of an NFL scout.

In this role, Dawkins will study and work closely with all phases of the scouting and football operations departments.

A safety who captivated Philly with his relentless motor and passion for the sport, Dawkins guided the team’s defense for 13 seasons, rounding out his Eagles career in 2008 as the franchise’s all-time leader in games played (183) and interceptions (34).

A second-round pick out of Clemson in 1996, Dawkins was recognized as a member of the NFL’s All-Decade Team of the 2000s, was voted the starting safety on the Eagles’ 75th Anniversary Team by the fans and was a five-time All-Pro nomination.