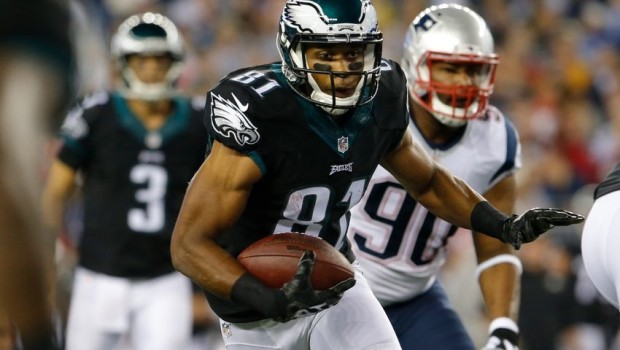 Eagle Jordan Matthews, WR: The Panthers’ defense has been terrific this season (fifth-fewest points to opposing wideouts) and QB Sam Bradford just spreads it around too much to trust Matthews until we see it more consistently.

Ryan Tannehill, QB: Only Tom Brady has a longer active streak of games with multiple passing touchdowns than Tannehill. Dude has thrown two touchdown passes in four straight games and now faces a Texans team that is tied for the fourth-most touchdown passes allowed. Having finally freed Lamar Miller, the offense is now less one-dimensional and should be able to sustain longer drives, leading to more scoring. Tannehill is inside my top 10 this week

Todd Gurley, RB: It’s not often a rookie who has played only two full games is your No. 1 player overall for the week, but Gurley is not your average guy. Dude is averaging an absurd 5.71 yards per rush and 3.91 yards before contact per rush, both of which are most among qualified RBs this season. The Browns, meanwhile, allow 4.97 yards per rush (second worst in the NFL) and 3.06 yards before contact per rush (third worst). He’s also super-cheap in daily.

Cam Newton, QB: The Eagles don’t give up a lot of production to quarterbacks, but Newton has become a must-start option no matter the matchup. Newton just scored 21 Fantasy points at Seattle, which was his third game in his past four outings with at least 21 points. His rushing ability is carrying his stat line since he’s scored three touchdowns on the ground and has three games with at least nine Fantasy points thanks to his legs. Kirk Cousins is the only quarterback with more than 19 Fantasy points against Philadelphia, including matchups with Ryan, Brees and Eli Manning.

LeSean McCoy, RB: Five running backs have scored double digits in Fantasy points against the Jaguars in their past four games with eight touchdowns allowed over that span. That bodes well for McCoy, who played well in Week 6 against the Bengals after missing the previous two games with a hamstring injury. He had 17 carries for 90 yards and a touchdown and played his first game without Karlos Williams (concussion) stealing touches. Williams should be out again this week, so look for McCoy to get a heavy workload in London.

Eli Manning, QB: Manning threw for a scoreless and pick-less 193 yards in the season opener against Dallas, but the Cowboys dominated time of possession in that game with a healthy Tony Romo under center. Matt Cassel won’t be able to sustain drives like Romo, and the Giants are at home this time. The Giants are 3.5-point favorites with a healthy team total of 24.25.

Frank Gore, RB: The Saints have allowed 4.93 YPC, the third-most rushing yards, and sixth-most fantasy points to running backs. While the Colts’ passing attack has an equally-enticing, maybe even better, matchup on Sunday, Gore’s is also phenomenal. With the second-highest team total of the week at 28.25 points in the game with the highest over-under (52), there’s plenty to go around for Indianapolis.

Jordan Matthews, WR: The Panthers’ defense has been terrific this season (fifth-fewest points to opposing wideouts) and Bradford just spreads it around too much to trust Matthews until we see it more consistently.

Jonathan Stewart, RB: I actually have him ranked inside my top 20 because it’s so brutal for running backs this week, but I’m more of a believer in his four games of fewer than 65 yards rushing with no scores than I am of last week, especially against an Eagles D that is third best in the NFL in yards per rush allowed (3.53) and has given up just one rushing touchdown.

Charcandrick West, RB: Last week was a total letdown in West’s first game since replacing Charles with nine carries for 33 yards and one catch for 6 yards with a lost fumble at Minnesota. The only good news was he had more work than Knile Davis (five carries for 13 yards and one catch for 12 yards), but Fantasy owners who went all in on West are hoping for more. Maybe it happens this week against the Steelers, but it’s hard to trust him in the majority of leagues.

LeGarrette Blount, RB: The Jets’ star-studded defensive line of LE Sheldon Richardson, NT Damon Harrison, RE Muhammad WIlkerson, and first-round DE Leonard Williams should gobble up Blount. If this one gets out of hand late, Blount could handle clock-killing carries, but most expect it to be closer than the Vegas sharps predict. If the Patriots are going to blow the Jets out, it’ll likely be Brady doing the damage.

Jordan Cameron, TE: Cameron is averaging over five targets per game, but has caught less than 50 percent of those and been held to 30 yards or less each of the past three games. The Texans don’t pose a tough matchup, but Cameron’s extremely low floor and Jarvis Landry’s penchant for getting the bulk of the middle-field looks paired with Rishard Matthews’ emergence on the outside has me looking elsewhere.