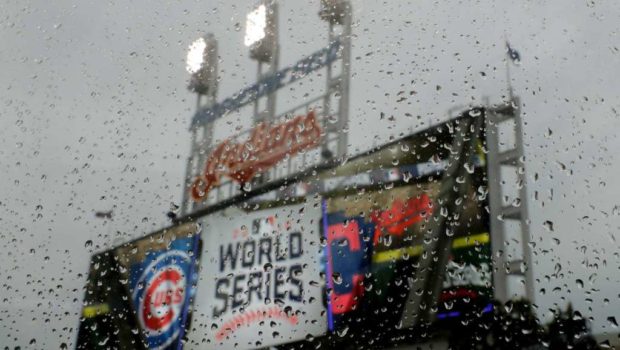 WEATHER OR NOT, INDIANS WILL HAVE ISSUES IN CHICAGO

The World Series moves to what’s certain to be a frenzied Wrigley Field in Chicago for the next three games.

The one-hour flight to Chicago might not provide enough time to ponder how to solve some of the issues that did not hurt Cleveland as it was winning eight of its first nine games in this postseason, but that may present major hurdles in the pursuit of the franchise’s first title since 1948:

The rotation beyond Corey Kluber. This has been a source of concern since Carlos Carrasco and Danny Salazar went down with late-season injuries, but has been masked by the brilliance of a bullpen headed by Miller and closer Cody Allen.

The deficiency will be harder to conceal against a club that features a balanced offense and the best rotation in the majors, with NL ERA leader Kyle Hendricks and veteran John Lackey waiting to take the ball in the first two games at Wrigley. The Cubs have so much starting depth, they left 15-game winner Jason Hammel off the postseason roster.

Cleveland will counter on Friday with Josh Tomlin, who had a 4.40 ERA in the season, and then bring back Kluber on three days’ rest, part of manager Terry Francona’s strategy of using his top three starters on short rest from Game 4 on. The deeper the series goes, the more worn-down those starters figure to get, requiring early intervention from the relievers.

In Game 2 the bullpen had to rescue Bauer in the fourth inning, by which point he had run up his pitch count to 87 and allowed eight runners to get on base. Bauer said the pinkie he hurt in a drone accident Oct. 13 was “totally fine,’’ but it did take him a while to get a feel for the ball in the 43-degree temperature. He gave up only two runs but left a whole lot of work behind for the relievers. The combined to yield three runs, two earned.

Jason Kipnis’ struggles: The two-time All-Star second baseman went 1-for-19 in the five-game victory over the Toronto Blue Jays in the American League Championship Series, and his first two games of the World Series have been less than glorious.

Kipnis went hitless in his first seven at-bats until lining a one-out double in the sixth for the Indians’ first hit Wednesday against Jake Arrieta. To Kipnis’ credit, he has not lost his sense of humor.

“I hadn’t seen first base for a long time. I forgot where it was,’’ he said. “I was confused where to go after that. No, it’s good to finally get one. It’s obviously a frustrating time to be in a slump when the team needs you the most. It’s nice to finally check in and get one hit and hopefully build some momentum off that, but we’re going to need more than just one hit if we’re going to help this offense go.’’

Kipnis, who sustained an ankle injury during the celebration of Cleveland’s first pennant since 1997, has had difficulties in the field as well. He booted a grounder in the fifth, extending Chicago’s three-run inning, and mishandled Francisco Lindor’s toss after the shortstop made a terrific stop of a hot shot by Addison Russell in the seventh.

Free runners: Cleveland pitchers gave up eight walks in Game 2, contributing to the pace of a game that lasted four hours and four minutes, and have handed out 10 free passes in the first two games. The Cubs failed to capitalize Tuesday, when they had the bases loaded and not outs in the seventh but did not score. It’s a dangerous way to live.

“We gave up nine hits, eight walks, two errors and we only gave up five runs,’’ Francona said after Game 2. “We’re probably pretty fortunate because there was traffic all night.’’

Going on the road: The Indians won three of their four playoff games away from Progressive Field. The challenge increases in magnitude this weekend.

The Cubs had the best home record in the majors at 57-24, and their victory total is the largest in the history of their venerable ballpark. Fans who have been waiting generations for a championship can create a lot of pressure on the home squad, but also a tremendous amount of noise.

Kipnis knows. He grew up outside Chicago as a Cubs fan.

They’ll need to clean up their act to accomplish that.