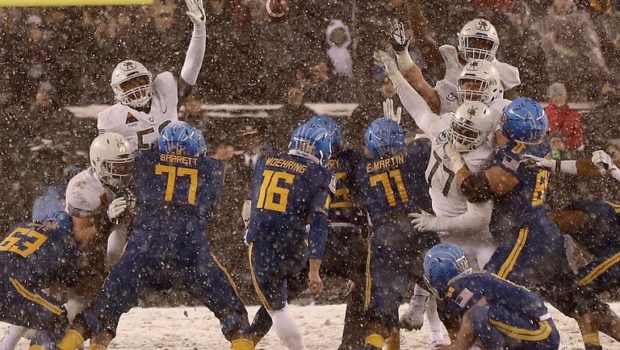 The first snowfall of the season Philly season made yesterday’s Army-Navy game at the Linc even more dramatic than the annual military battle normally is.

If only it had an effect on the game’s outcome.

Bennett Moehring narrowly missed a 48-yard field goal on the final play and Army held off Navy 14-13 (above).

Army (9-3) won the Commander in Chief’s Trophy and its second straight win over Navy (6-6) following 14 straight losses in the series.

“We’ve got seniors in there that went 4-8 as freshmen and 2-10 as sophomores,” Army Coach Jeff Monken said. “Now they’ve won 17 games in the last two years. Really an incredible change.”

After trailing most of the game, Ahmad Bradshaw pushed over the goal line on a quarterback sneak with 5;10 left and Blake Wilson kicked the extra point to put Army ahead.

But Navy quarterback Malcolm Perry, who ran for 250 yards on 30 carries and a 68-yard score in the second quarter, led Navy to the Army 31-yard line with three seconds left.

Navy elected to try a field goal, and after about 10 players used their feet to clear the steady snow during a timeout, Moehring’s kick was long enough but drifted barely left.

“Came up a couple of feet short,” Navy Coach Ken Niumatalolo said. “This is a great rivalry. It was another classic game.”

Army cut its deficit in the series to 60-51-7 in a matchup of bowl-bound teams. The Black Knights claimed the Commander-in-Chief’s Trophy thanks to an earlier victory over Air Force.

“That trophy hadn’t been in our possession for 21 years,” said Monken, who is in his fourth season. “To be able to accomplish that with this team is a great source of pride.”

In a game that included only three passes — Army completed its lone toss — the Black Knights produced a 13-play, 65-yard drive to take a late lead. John Trainor tiptoed the sideline for 8 yards one play before Bradshaw’s 12th touchdown of the season. Bradshaw rushed for 94 yards on 21 carries.

Navy took advantage of the ensuing kickoff going out of bounds and moved down the field. Perry dropped a shotgun snap on fourth down at the Army 37, but picked up the ball and ran for a first down. But Navy committed two false-start penalties, making the final field-goal attempt more difficult.

Snow started falling in the late morning on the 29-degree day. Workers used blowers to uncover the lines and hash marks during timeouts as a light snow fell throughout.

The teams, both of which run the triple-option, combined to complete only 59 passes all season. The snow made both coaches want to throw it even less as Navy went ahead, 7-0, on Darnell Woolfolk’s 3-yard run on the opening possession.

The first pass came with under nine minutes left in the second quarter. Army completed its only pass, a 20-yard wobbler from Bradshaw to Calen Holt, midway through the third quarter.

The weather made one of sports’ biggest rivalries an even more physical contest. Army’s all-white uniforms — a nod to the 10th Mountain Division of World War II — served as almost camouflage in the snow.

Perry was the star through three quarters. Getting the start at quarterback ahead of Zach Abey, his long touchdown run in the second quarter was his third rushing touchdown of more than 65 yards this season.

Perry looked like he might have another long touchdown run, but he stumbled and fell at the Navy 11 early in the third quarter. The Army senior John Voit chased him down.

“I’m not sure if I hit his foot or not,” Voit said. “But I think I got enough where he slipped in the snow, and thank God he went down.”

Army then held Navy to Moehring’s second field goal, from 24 yards, to make the score 13-7 and allow for their fourth-quarter comeback.