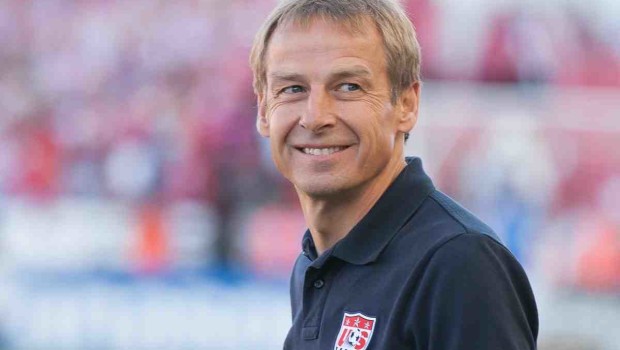 'WE WANTED TO GO HOME GOING FOR IT — AND WE DID'

So said Michael Bradley after the U.S. national team, beaten 2-1 in extra time by Belgium yesterday, exemplified the spirit of coach Juergen Klinsmann (photo above)

The Unites States left this World Cup on coach Jurgen Klinsmann’s terms – playing the potent Red Devils straight up, taking chances and receiving key contributions from some of the manager’s more scrutinized selections.

The U.S. opened up the game despite Belgium’s advantage in depth and talent, survived thanks to a performance for the ages from goalkeeper Tim Howard and nearly forced a penalty kick shootout with a late, desperate surge. The Americans were defeated, but hardly daunted.

“I think as fans, we all — as this tournament has gone on — we’ve admired the teams that have gone for it,” midfielder Michael Bradley said. “We, at a certain point, kind of I think, without making a big deal out of it, said to ourselves that whenever we were going home, whether it was after three games, whether it was tonight, whether it was another week or two, we wanted to go home going for it. And we did,”

The statistics, starting with Howard’s 16 saves – the most in a World Cup match since FIFA began keeping records in 1966 – don’t tell the story of an even game, but they do say something about the American approach and Klinsmann’s intentions. Belgium put 27 shots on goal (the U.S. had nine) and earned 19 corner kicks and if not for Howard, would have waltzed out easy winners after 90 minutes.

“My hat’s off to them. They created a lot of chances. They’re top quality players,” Howard said.

Talent was part of the reason, but the American posture was another. Klinsmann went out with guns blazing. He promised proactive soccer and on Tuesday, he seemed intent to deliver it, consequences be damned. A signal was sent with the removal of Kyle Beckerman from the U.S. starting 11. The Real Salt Lake stalwart was a strong and reliable defensive presence during the group stage, a shield and shepherd for the U.S. back four. He was replaced by Geoff Cameron, who typically is a defender but has the experience and range to play in midfield.

In fact, Cameron appeared to play a freer, more advanced role than Beckerman, which opened up the midfield to traffic in both directions. In addition, outside backs DaMarcus Beasley and Fabian Johnson were given the freedom to bomb forward and take their chances against their Belgian counterparts, who were considered the soft spots in the Red Devils’ back four.

It created a back-and-forth match that Klinsmann said “went to the extreme.” That sounds like something that would appeal to the ambitious coach, who’s always looking for another way to push his players.

“[The gave] gave everything to the fans, to the crowd – a real drama, a thriller,” Klinsmann said. “We are all very proud of our team, of every player stepping on the field today. They gave everything they had. I think they made their country proud with their performance.”

Defender Matt Besler, one of the team’s most consistently excellent performers across the four World Cup matches, said that following the group-stage finale against Germany, the Americans didn’t want to feel like they were sitting back against Belgium, consenting to a siege. Leaving more space in midfield and behind the outside backs surely would invite the Red Devil attack, but it also would allow the Americans to push forward more quickly in transition. It was a risk the U.S. was willing to take.

“We all saw the Germany match. We didn’t come out and really go after them. We wanted to make sure we gave them a game and make sure that we really went for it and I think that’s exactly what we did,” Besler said. “We’re going to hold our heads high and hold our chest out because we’re proud of what we did.”

Klinsmann was forced to re-evaluate the plan after only half an hour, when Johnson pulled up with a hamstring injury. Belgium was dominant early, and if the manager wanted to tighten things up he could have brought Beckerman on and shifted Cameron to right back, where he plays for Stoke City.

But Klinsmann doubled down and inserted 20-year-old speedster DeAndre Yedlin. The game became a track meet and Yedlin served notice early, taking Belgium’s Eden Hazard on 1-on-1 and earning a U.S. corner kick. A few minutes later, Yedlin raced onto a Bradley pass and hit a cross that Graham Zusi should have redirected on goal. Those were the opening salvos in an electric performance from a player who many thought shouldn’t have been in Brazil.

The U.S. took the game to extra time, after appearing to be a close-range Chris Wondolowski chance away from winning it in injury time of regulation. But the Americans fell behind in the 93rd minute when Belgium substitute Romelu Lukaku powered past Besler on the right and set up Kevin De Bruyne for the go-ahead goal. The fatigued U.S. had no answer for the robust Lukaku, who was Howard’s teammate at Everton last season. In the 105th, he doubled the Belgian lead.

“I’ve got to admit, even when we were down, 2-0, I thought we were going to come back,” U.S. Soccer president Sunil Gulati said. “And we had three, four, five chances in the last five minutes.”

Moments later, Klinsmann called on Julian Green. The 19-year-old Bayern Munich reserve, a somewhat controversial addition to the World Cup roster, became the youngest player to represent the U.S. on the sport’s biggest stage. He had failed to impress during the pre-tournament sendoff series but he certainly did so when it counted, running onto Bradley’s looping, 107th-minute pass and rifling a volley past goalkeeper Thibaut Courtois.

“It’s huge,” Yedlin said of the opportunity Klinsmann gave to the two youngsters. “It instills our trust in him, and it instills his trust in us. It’s huge. It’s great for the future. It shows we can compete at this level.”

It was defeat with defiance.

“The last five or six minutes [were] some of the most exciting feelings that I’ve had as a soccer player,” Besler said.

There was no question or confusion concerning the Americans’ feelings about the loss. It was a disappointment to say the least, and there was no moral victory. The better team won, and the Americans were left to contemplate a second consecutive exit from the round of 16.

“We fell short,” Besler said. “The end goal is never to just get out of our group. We really wanted to make a deep run into the tournament.”

Instead, their coach made a statement. This is Klinsmann’s team and program and all indications are that it will remain so for the next four years. In many ways, he was the U.S.’s World Cup star. His frequent press conferences featured headline-grabbing quotes about the date of his return flight or the potential bias of an Algerian referee that were the soundtrack of the tournament. And the manner of his team’s elimination was covered in his fingerprints. The U.S. went out with the players and attitude that Klinsmann preferred.

“We wanted to step out and be aggressive and close down and go forward and make chances and see if we can now tilt the bar in our favor,” Bradley said. “I think that’s part of, now, the progression for us, that now you’re able to play games like this. Regardless of who you play against, regardless of the situation, of the pressure, and be able to play for it — to play on even terms. And I think over the course of four games at this World Cup we were able to do that. Not in every moment, but certainly against Portugal and certainly today against Belgium.”