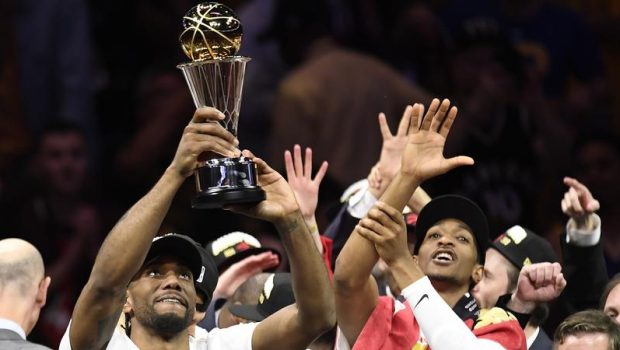 WE THE CHAMPS! HOW RAPS BEAT DUBS AFTER KLAY WENT DOWN

Kawhi Leonard, who posted 22 points, six rebounds and three assists, was named Finals MVP for the second time in his career, joining Kareem Abdul-Jabbar and LeBron James as the only players to win that award while representing multiple teams. The all-star forward, who sealed the title with three free throws in a surreal closing second, previously won in 2014 with the San Antonio Spurs, who traded him to the Raptors last summer.

“I wanted to make history here,” Leonard said. “A lot of people were doubting me. They thought I was faking an injury or didn’t want to play for a team. That was disappointing to me that it was out in the media. Going through that, I knew I had to make myself happy and no one else, and I had to trust myself. It doesn’t matter what anybody has to say about me. I know who I am as a person, and I know how I feel. I’m going to play the right way and not try to make headlines.”

Over the past two weeks, the Raptors and Warriors have navigated an ugly sideline confrontation, a gimmick defense cameo, a crowd etiquette controversy, Kevin Durant’s devastating Achilles’ injury and multiple tense endgame scenarios. Game 6, the Warriors’ final night at Oracle Arena after 47 seasons, was another high-intensity affair that saw Klay Thompson exit early with an apparent knee injury and that wasn’t resolved until the last moment.

The endgame madness was set up by a costly Danny Green turnover with less than 10 seconds left, which granted one last gasp for the Warriors. Stephen Curry got open for a three-pointer, but his attempt rimmed out, setting off a mad scramble for the rebound near midcourt. Draymond Green corralled the loose ball, and the Warriors signaled for a timeout without having any remaining, triggering a technical foul. Leonard converted the free throw, but the interminable final second was only just beginning.

Leonard was fouled immediately on Toronto’s ensuing inbounds play, triggering a lengthy video review that resulted in two more free throws. He hit both to provide the winning margin and finally set off the celebrations.

The triumphant finish was made possible by a strong start from Kyle Lowry, who came out firing in what will go down as a career-defining performance. The longest-tenured Raptor hit his first four shots, including three three-pointers, to claim an early 11-2 lead. Lowry scored 15 first-quarter points, frustrating a rowdy crowd that loudly paid homage to Durant and to Oracle’s end, and finished with 26 points, seven rebounds and 10 assists.

“This is a great group of guys,” Lowry said. “This is crazy. This is awesome. Toronto, we brought it home, baby!”

Lowry’s assertive early flourish — one game after his potential buzzer-beater was tipped well off course by Draymond Green — was characteristic of Toronto’s tendency to respond well to adversity throughout the postseason.

After an opening stinker against the Orlando Magic in the first round, the Raptors responded by reeling off four straight wins. After a blowout loss in Game 3 to the Philadelphia 76ers, the Raptors won three of the next four — completing the second-round series victory with Leonard’s four-bounce walk-off jumper. After looking overwhelmed in two opening losses to the Milwaukee Bucks, Leonard led the Raptors to four straight wins by locking up MVP favorite Giannis Antetokounmpo.

Against Golden State, Toronto twice suffered demoralizing home losses. In Game 2, the Raptors conceded an 18-0 run that might have broken a weaker team. Then, in Game 5, they built a six-point lead late in the fourth quarter before collapsing on both ends in a wild final three minutes.

“We bounced right back,” Raptors Coach Nick Nurse said. “That’s what we have normally done in the playoffs. This is a strong minded, tough-ass group of guys. It really is.”

Indeed, the close out was a group effort. Pascal Siakam, benched by Nurse late in Game 5 for his poor defensive effort, scored 26 points and added 10 rebounds, hitting a key runner in the game’s final minute. Backup guard Fred VanVleet, whose timely perimeter shots were a key source of offense throughout the postseason, added 22 points and hit five three-pointers, including a go-ahead shot with just under four minutes remaining.

Following the Game 2 loss, Nurse told the Raptors that their goal was to steal either Game 3 or Game 4 at Oracle. Leonard quickly replied: “F— that. Let’s go get them both.” By the time the champagne popped, Toronto had beaten Golden State in all three meetings at Oracle. As recently as two years ago, the Warriors were nearly invincible at home — going 36-5 during the regular season and 9-0 in the playoffs en route to a title.

But the 2019 Warriors were a diminished version of the 2017 Warriors because of Durant’s absence and a litany of injuries to DeMarcus Cousins, Kevon Looney and Andre Iguodala. Golden State was forced to utilize its fifth starting lineup of the series in Game 6 because of various injuries, and the defending champs managed to outscore Toronto in just five quarters in the entire series. Still, Golden State displayed remarkable resolve, with Curry scoring 21 points and Green notching an 11-point, 19-rebound, 13-assist triple-double.

“What I’ve witnessed over the last five years is an incredible combination of talent and character and commitment to each other,” Warriors Coach Steve Kerr said. “This just doesn’t happen. A group of guys like this doesn’t come around together and do what they did. I can’t tell you my gratitude [to them].”

Thompson, who finished with a game-high 30 points, was the latest Warrior felled by injury, falling hard to the ground after he was fouled on a dunk attempt by Danny Green late in the third quarter. The all-star shooting guard initially headed to the locker room with an apparent left knee injury, only to reverse course and return to the court to shoot his free throws. Thompson’s brief return was met by the loudest applause of the night, but he returned quickly to the locker room and left the arena shortly thereafter on crutches.

“Tough way to go out,” Curry said. “A lot has been proven about who we are a team. The fight we have with all the adversity we had this season. With our DNA, and who we are, I wouldn’t bet against us being back on this stage next year and going forward. I definitely don’t think it’s over.”

“There’s a meaning to having one NBA team outside the U.S.,” Raptors president Masai Ujiri said, to loud applause. “We wanted to win in Toronto, and we have won in Toronto!”