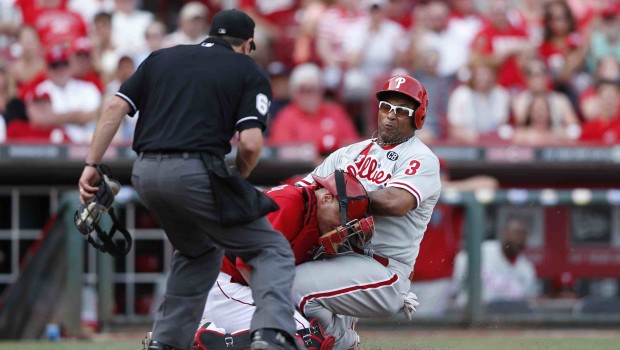 ‘WE STILL HAVEN’T HAD A HOT STREAK’

Is Phils manager Ryne Sandberg whistling past the graveyard that the 2014 is quickly becoming?

Even a devoted Phillies fan has to realize that his favorite team is running out of time to turn around a season that is quickly deteriorating into another lost cause..

The Phillies left Cincinnati 11 games under .500 and seven games behind front-running Atlanta in the NL East and with the worst record in the National League. They are on pace to lose 96 games following an 89-loss season in 2013. Since May 4, the Phillies are 10-22.

“I believe in my team,” catcher Carlos Ruiz told MLB.com’s Todd Zolecki. “We have some great players here. Like I say, we put everything together and believe, we can turn around everything. I hope you know we can do this. We have to do our best at home and go from there. We’ve got to keep going.”

The road trip started Tuesday with a very brief team meeting at Nationals Park in Washington, where Phillies manager Ryne Sandberg spoke for only a minute or two to stress the urgency of the moment and the need to focus and execute in big moments.

But does this team have the ability to do that?

“Well, I see the potential every now and then,” he said. “We just need to be more consistent with putting everything together.”

The Phillies thought a controversial play at the plate (photo above) cost them in Saturday’s 6-5 loss to the Reds, but they had nothing like that to point to Sunday. They simply could not hit Reds right-handerHomer Bailey, while Phillies right-hander made a couple of costly mistakes in a four-run fifth inning.

The Phillies took a 1-0 lead in the third, which included Jimmy Rollins’ 2,230th hit of his career. He needs five more hits to pass Mike Schmidt (2,234) for the franchise’s all-time hits record.

Buchanan worked effectively through four scoreless innings, allowing only three baserunners. But things fell apart in the fifth inning as the Reds took a three-run lead.

Todd Frazier started the inning with a leadoff single to center and Zack Cosart followed two batters later with a one-out double to right to put runners on second and third. The Phillies moved the infield in with Bailey at the plate. He hit a 0-1 curveball past Rollins to score both runners to make it 2-1.

“Just missed my spot,” Buchanan said. “I got the ground ball. I was hoping it would get to Jimmy. He happened to find the hole up the middle. It’s unfortunate.”

Buchanan then threw Billy Hamilton a 3-2 changeup and he hit the pitch out to right field for a two-run home run. It was Hamilton’s second homer of the season.

Asked if he liked the changeup there, Sandberg said, “He had a real good fastball today. He was effective with it. [The changeup] was elevated, even the curveball to the pitcher. He was real good the rest of the game with his fastball to both sides of the plate and his slider. Executed better, it would have been a better pitch.”

The Phillies just completed a stretch of 20 games in 20 days with an off-day Monday. They follow that grueling stretch with 21 games in 20 days with their next off-day June 30. If they continue to play like they have until June 30 there is little doubt this team will be a seller, not a buyer at the non-waiver trade deadline on July 31.

“We still haven’t had a hot streak,” Sandberg said. “I believe there is a hot streak in there. If we could put together two or three weeks or a month with a hot streak, we can chip away and get back.”